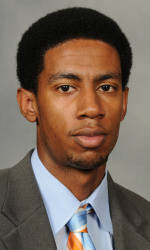 Noel Johnson to Transfer from Clemson

“Noel has decided at this time that it is in his best interest to continue his playing career elsewhere,” Brownell said. “We certainly wish him the best as he finds a program that better fits his needs.”

Johnson appeared in all 39 games over his two seasons with the Clemson program, averaging 4.4 points per game. This season, he appeared in all seven games with one start and averaged 2.9 points and 1.6 rebounds per game. His career high was 13 points last season against South Carolina State.

“I want to thank Clemson University, I’ve learned a lot over the last year and a half,” Johnson said. “I will miss all of my teammates and everyone involved in the program. I wish them nothing but the best in the future.”