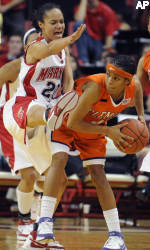 “It was a fun game. The exciting part is seeing where we’re at now, where we’re getting defensively, getting better and better every game,” Frese said.

The Terps scored 100 points in a game for the first time since Jan. 10, 2007. They had scored 98 points twice earlier this season.

The loss was Clemson’s biggest ever. It’s previous biggest defeat was by 57 points to Duke in 2004.

“Maryland is a great team, they have a lot of weapons. I just would have liked to compete a little better,” Clemson coach Cristy McKinney said. “They probably get more work done in practice than they did today against us because I just didn’t feel like we competed like we wanted to.”

“I really like where they (Harper and Langhorne) are right now,” Frese said. “They are doing a tremendous job with their leadership and their vocal spirit.”

Harper said she and Langhorne enjoy playing together.

“I know we make each other better,” Harper said. “Her being left-handed and me being right-handed just works out so nicely and we both have our sides of the court. We just love playing together and it’s great.”

Kristi Toliver added 19 points and 10 assists for the seventh double-double of her career. Marah Strickland had 11 points.

Maryland senior Ashleigh Newman tied a school record, playing in her 123rd consecutive game. Newman has played in every game during her four year Maryland career.

“Ashleigh’s fought through a lot of adversity and injuries throughout her career and so it’s a great accomplishment,” Frese said. “With so many injuries, her being able to (play) every game speaks to her toughness.”

“That’s an amazing stat (45-0). I have never seen a stat like that for us,” Frese said. “It shows that we’re really being aggressive on defense and doing a good job of handling the ball on offense.”

The Terps shot 73.3 percent in the second half and 62.1 percent for the game.

Clemson was led by Sthefany Thomas with nine points. The Tigers shot 36.4 percent for the game.

Maryland jumped to a 12-2 lead over the game’s first four minutes and never trailed. Clemson closed to 14-9, but a 15-3 run by the Terps that included 11 straight points put Maryland up 29-12 with eight minutes to play in the first half.