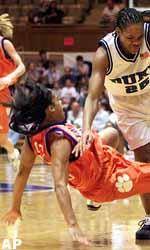 Tillis finished the game 9-13 from the field and 3-5 from the three-point line. She also finished with six rebounds and four assists, three blocked-shots and one steal.

Clemson was led in scoring by Krystal Scott with 19 points as she was 7-8 from the field, and 2-2 from the three-point line. She also had four assists. Chrissy Floyd had 16 points and finished the game with three assists and three steals. Five Clemson players hit in double figures. In addition to Scott and Floyd, Marci Glenney, Maggie Slosser, and Julie Aderhold all scored 10 points each. Duke won the battle of the boards 35-23. Alana Beard had eight rebounds to lead Duke and Maggie Slosser both had five rebounds each to lead Clemson.

Clemson jumped to a 8-0 lead with 15:40 left to go in the first half as Chrissy Floyd scored four points in the early going. The Tigers built a 19-14 lead with 10:31 left to go as Kanetra Queen scored on a jump shot. However, the Blue Devils scored six straight points as Wynter Whitley hit two field goals in the Blue Devil run to give Duke its first lead of the game 20-19 with 8:20 remaining.

Clemson went on a 16-6 rally and narrowed the Duke lead to seven, 63-56 with 5:58 remaining as Krystal Scott scored five points in this Clemson rally. Beard hit a three- point shot with 4:32 left to extend Duke’s lead to 10. The Blue Devils had a 10-point lead with 3:46 left as Monique Currie hit two free throws. Clemson’s Julie Aderhold made a three-point jump shot with 3:25 left to go.

Alana Beard made a layup and Krystal Scott hit a two-point shot as Clemson again came within four at the 1:30 mark. Matyasovsky missed a field goal underneath with :45 seconds left and Clemson had a chance to narrow Duke’s lead to two but a Lady Tiger turnover with :34 seconds remaining gave Duke the ball and Clemson was forced to foul. Gingrich hit two free throws to give Duke a 75-69 lead with :22 seconds left. Clemson turned the ball over with nine seconds remaining and Monigue Currie made a layup with five seconds left to give Duke the eight-point win.

“I was very proud of our effort,” said Clemson Head Coach Jim Davis. “We fought our hearts out. Duke has so many weapons. Tillis is a hard matchup for us. I am proud of the way we executed today. We put our selves in a good position, but we did not execute down the stretch. Our Achilles’ heel this season has been rebounding and we were outrebounded again tonight. I can’t fault our effort, we came here to compete and we take pride in representing Clemson.”

“Clemson had us on our heels,” said Duke Coach Gail Goestenkors. Give Clemson credit as they came prepared and were very focused. I was very pleased with the win. Clemson certainly tested us. We shot 57% from the floor and we had a lot of good looks at the basket.”