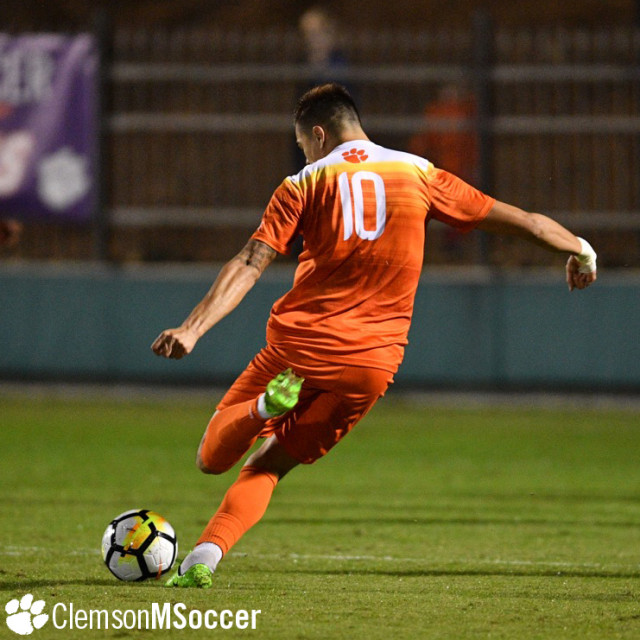 No. 4 Clemson Falls to No. 11 Louisville To End Regular Season

In the 19th minute, Tate Schmitt gave the Cardinals an initial 1-0 lead with his seventh goal of the year, a give-and-go from Mohamed Thiaw that Schmitt netted from eight yards out. Diego Campos evened the score in the 38th minute after a shot by Oliver Shannon was blocked and Campos buried the deflection into the back of the net. The two teams went into the break knotted at 1-1.

In the 58th minute, Clemson got three consecutive shots off, but Louisville’s Jake Gelnovatch saved two and the third sailed wide. Tim Kubel put Louisville up 2-1 in the 60th minute with his sixth score of the year. The Tigers had a few more opportunities in the final 30 minutes, but the 2-1 score held.

“We scored a goal, but we gave up two goals that we shouldn’t have conceded,” head coach Mike Noonan said. “We should have scored more, but Louisville took their goals well, and that’s the most disappointing thing. But we’re playing exceptionally well. We’ve won two tough games on the road, and we came home and played well…we’re progressing well. There are finer points of the game that we have to get better at, and that’s in front of the goal and in our own penalty box. We’ll work on that, and I don’t think there’s anything to be disappointed about other than the result.”

For the match, Clemson outshot the Cardinals 21-5, with a 6-2 advantage in shots on goal.

The Tigers concluded the regular season as the No. 5 seed heading into the conference tournament, and will next face Syracuse on Wednesday, Nov. 1.