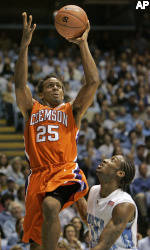 CHAPEL HILL, N.C. (AP) – Third-ranked North Carolina spent most of Sunday looking nothing like the team that had rolled to lots of easy victories or the tradition-rich program that has tormented Clemson here for so long.

Then everything changed, thanks to one frantic comeback and another iron-willed performance from All-American Tyler Hansbrough.

Hansbrough scored 13 of his 39 points in the first and second overtimes to help the Tar Heels rally from a 15-point deficit and beat Clemson 103-93, keeping North Carolina perfect in 53 home games against the Tigers all-time.

Wayne Ellington added 28 points for the Tar Heels (22-2, 7-2 Atlantic Coast Conference), who set an NCAA record for the longest home winning streak against one opponent. The previous record was 52, set by Princeton against Brown from 1929-2002.

Yet for the Tar Heels, the streak wasn’t important. While Hansbrough noted that no one wanted to be on the team that ended it, North Carolina had bigger things to worry about: namely, bouncing back from an emotionally draining home loss to No. 2 Duke and proving to themselves they could win a tough game without injured point guard Ty Lawson.

They managed to do both, shaking off a disastrous start and erasing Clemson’s 11-point lead in the final 3 minutes of regulation.

“Fellas, it wasn’t looking good. We were looking at a 30-point butt-kicking there about 5 or 6 minutes into the game,” North Carolina coach Roy Williams said. “If I live to be 106, I won’t be any more proud of a group of kids than I am of that bunch right there.”

In many ways, this was the antithesis of what happened in Wednesday’s 89-78 loss to the Blue Devils. With Lawson sitting out after spraining his left ankle against Florida State last weekend, the Tar Heels looked a step off all night while their offense degenerated into a Hansbrough-takes-on-all attack.

This time, he got help when the game hung in the balance.

The 6-foot-9 junior, who had 28 points and 18 rebounds against Duke, came up a point shy of matching his career-high. He went 11-for-16 from the field and 17-for-19 from the line to go with 13 rebounds. Throw in his 40-point day against Georgia Tech here as a freshman, and Hansbrough now owns the top two scoring performances in Smith Center history.

Ellington, who had 36 points and the last-second 3-pointer in the Tar Heels’ 90-88 overtime win at Clemson last month, hit five 3-pointers and came up with a tough driving shot past Raymond Sykes in the final minute of the second OT to help seal it.

Meanwhile, Danny Green finished with 14 points, including consecutive 3-pointers late in regulation that seemed to have the Tar Heels believing they really could come back.

Even Quentin Thomas, the one-time third-stringer pressed into duty with Lawson out, came up with some key plays late. The senior hit a driving shot to force the first overtime and two free throws to force the second, finishing with six points and a career-best nine assists.

“We never gave up,” said Hansbrough, who is averaging 29.7 points and 17.3 rebounds over his last three games. “That’s what’s special about this win for us.”

The game was just as unforgettable for the Tigers (17-6, 5-4), but for all the wrong reasons. They got off to a terrific start behind their fullcourt pressure, forcing North Carolina into turnovers on its first five possessions, taking an 8-0 lead in the first 2 minutes and holding the Tar Heels to nine points in the first 9 minutes.

Clemson was 12-of-28 from 3-point range to keep the Tar Heels playing catch-up most of the way, but the Tigers came undone in the critical minutes and couldn’t score on the final possession of regulation to avoid overtime.

“After we got out of our little funk, we started playing together and playing better defense,” Green said. “We continued to stay at them and put a hand up in their face and pressure them. We knew that in the end we’d still be there.”

It left Clemson’s players hearing the same questions after yet another loss in Chapel Hill.

“I don’t think there’s a curse,” said Cliff Hammonds, who led Clemson with 31 points but went scoreless in the OTs. “We wanted it most of the game, but then we lost focus on our defense coming down the stretch and they wanted it a little more than us.”

The Tigers managed only a drive from Potter and a free throw from James Mays in the second overtime.

“It’s like having your favorite thing in your grip and losing it,” said K.C. Rivers, who had 14 points. “And you can’t get it back.”