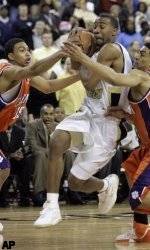 No. 25 Tigers Lose at Georgia Tech

ATLANTA (AP) – Javaris Crittenton scored a career-high 26 points and Thaddeus Young added 14 to help Georgia Tech end a four-game losing streak with an 80-62 victory over No. 25 Clemson on Saturday.

Tigers coach Oliver Purnell was ejected for arguing with game officials at the 2:42 mark and his team down 12 points. After two short disruptions with the shot clock, Purnell snapped after the officials declined to call a pair of fouls on the Yellow Jackets.

“I apologized to our team for leaving them out there alone, but yet at the same time, enough is enough,” Purnell said. “We had errors at Duke, an obvious no-call and walk that cost us the game against Virginia and now this game … at some point you have to fight for your team.”

Georgia Tech (14-8, 3-6 ACC) lost its 17th straight on the road earlier this week at Wake Forest, but the Yellow Jackets kept Clemson frustrated most of the game, forcing 22 turnovers that led to 27 points.

“I don’t know that we were flat,” Purnell said. “I think that Georgia Tech was very energized. They were ready to play, and I think that we were just hanging in there and would have an opportunity to creep back into the game at some point, the way you have to do many times on the road.”

Crittenton’s poor play had contributed largely to Georgia Tech’s recent struggles. During the four-game slide, he was just 11-for-46 from the field with 16 assists and 13 turnovers.

A highly recruited freshman point guard from nearby Southwest Atlanta Christian, Crittenton finished with six assists and five rebounds. He increased the lead to 13 by taking a long rebound and driving the baseline for a one-handed dunk with about eight minutes remaining.

James Mays scored 15 points to lead Clemson, which never closed within single digits after Vernon Hamilton’s buzzer-beating jumper made it 36-27 at halftime.

In their past two games, the Tigers gave up field goals in the last 16 seconds, losing by two points at Duke and by one to Virginia.

“We’ve been getting a fair chance,” Hamilton said. “We’ve been battling hard and the other team is playing just as hard. It’s all on us, and we’ve got to prove ourselves.”

Young, the second of coach Paul Hewitt’s highly regarded freshmen, showed toughness on the offensive boards by grabbing the third rebound of a possession and converting a three-point play to keep Georgia Tech ahead by 13.

Jeremis Smith had 10 rebounds for the Yellow Jackets. After taking a hard offensive foul in the lane from Trevor Booker, Smith had to kneel briefly on the floor before Coach Hewitt and two teammates escorted him to the bench.

He returned in the next minute.

Mouhammad Faye, who started four of the past five games for Georgia Tech, played just one minute of the first half. In a 75-74 loss at Clemson last month, Faye was one of three Yellow Jackets to allow Mays’ game-winning layup with 2.2 seconds remaining.

Crittenton played a role in that loss, too, stepping aside rather than taking a charge as Mays dribbled for an uncontested shot.

Rather than use Faye, Hewitt went with another 6-foot-10 forward, Alade Aminu, who had 10 points in 15 minutes after staying on the bench the past seven games.