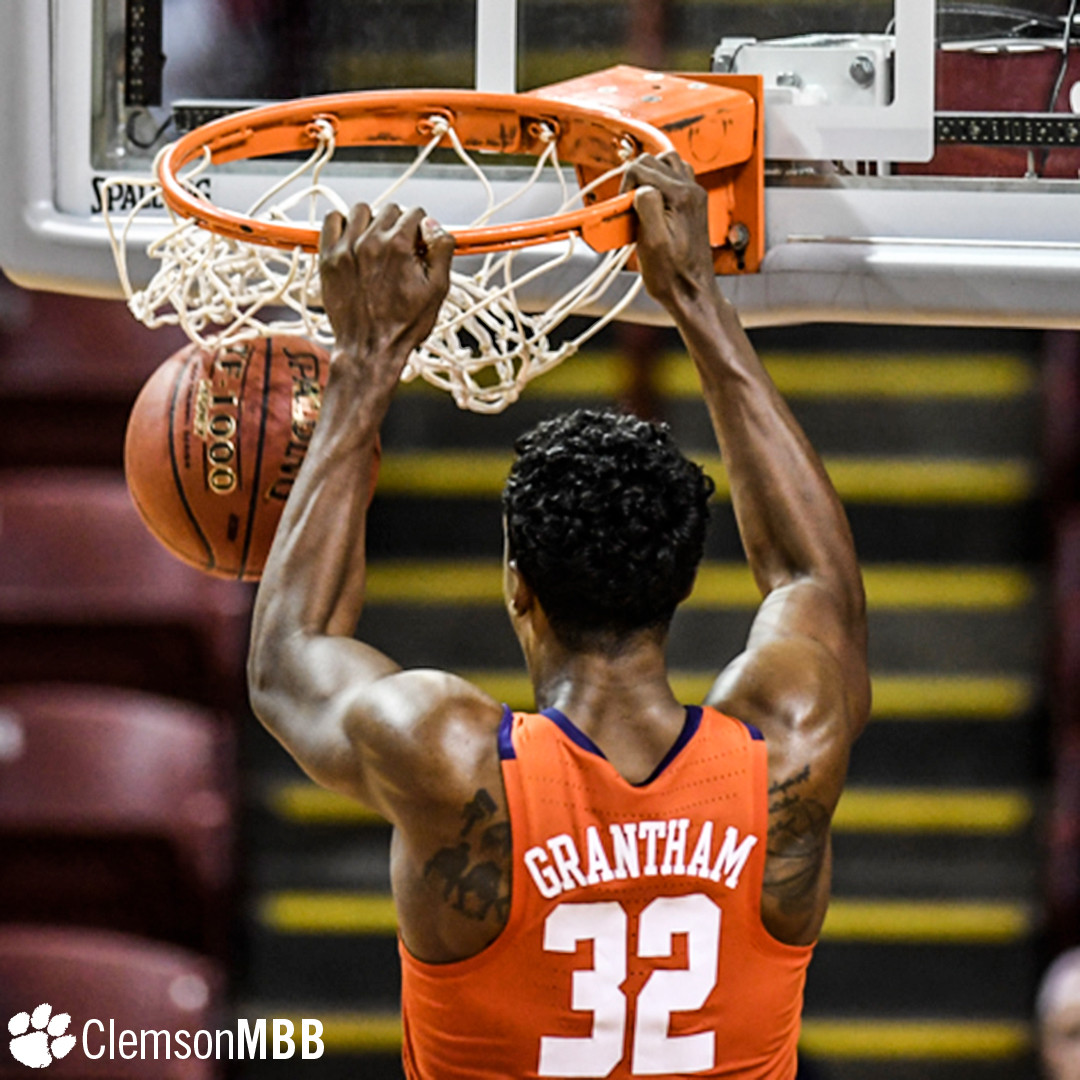 CLEMSON, S.C. — Clemson University men’s basketball got a career night from Donte Grantham’s career-best 23 points and 14 rebounds, including five assists to go along with clutch team free throw shooting down the stretch that saw Clemson knock down six consecutive foul shots to hold onto the 74-70 road win at Boston College on Wednesday night.

Continuing with Grantham’s strong performance, his first four rebounds of the first half placed him into elite company. Grantham is now just one of six players in Clemson history to amass at least 1,000 points, 500 rebounds and 200 assists in a career – joining the likes of Greg Buckner, Trevor Booker, Horace Grant, K.C. Rivers and Vincent Hamilton.

The Tigers shot 18-for-20 (.900) from the charity stripe – its second-best percentage at the line in a true road ACC game in program history.

Along with Grantham’s stoic performance, Marcquise Reed finished the game with 17 points, while Elijah Thomas (16 points, four rebounds) and Gabe DeVoe (10 points, six rebounds) rounded out the double-figure scorers for the Tigers.

Clemson raced out of the gates with a vengeance and quickly opened up a double-digit lead on an 18-2 run that would increase the advantage to a game-high 19 points at 35-16 with 5:27 left in the opening stanza. The Tigers would close strong to take a 38-23 lead into the locker room.

However, the Eagles’ (10-5, 1-2 ACC) Jerome Robinson would snap off for 26 points on 10-for-14 shooting from the field, including six from deep to push the Tigers until the very end.

With 1:02 remaining in regulation, the Eagles’ Ky Bowman hit two free throws that complete a long-winded comeback for BC and would tie the game at 68-68.

This is when the Tigers would shoot a perfect 6-for-6 at the foul line thanks to Reed, DeVoe and Shelton Mitchell. The Eagles would finish the last minute of the game 1-for-5 from the field.

The Eagles’ Robinson led all scorers with 28 points. Bowman finished with 19.

The Tigers will return to the court as the home team against Louisville with a 12:00 p.m. tip against the Cardinals from Littlejohn Coliseum.

Notes: Clemson improves to 13-1 on the season (best start since 2008-09) … the Tigers have only started a season 13-1 or better on five occasions (3 NCAA appearances, 2 NIT appearances) … it marked the Tigers’ first win as an AP ranked team since a 73-70 win at NC State on Jan. 16, 2010 (ranked 24th) … the win moves the Tigers to 16-7 all-time against Boston College and 4-6 on the road against the Eagles … the win also gives them six wins in a row in the series with BC … also with the win, head coach Brad Brownell earned his 137th career win at Clemson – moving him two shy of the third-most victories all-time at Clemson … with Clemson shooting 18-for-20 at the foul line – it marked the second-best free throw percentage for the Tigers in a true road ACC game in program history … 90.0 percent at the foul line was also the highest percentage this season for the Tigers on qualifying attempts (minimum of 10) … Donte Grantham notched his fifth career double-double and fourth of the season with a career-high 23 points and career-high 14 rebounds … he joined elite company as one of just six players in Clemson history to amass at least 1,000 points, 500 rebounds and 200 assists in a career … Grantham’s five offensive rebounds tied an individual best this season (Gabe DeVoe – 5 vs. Texas Southern, 11/24/17) … with exactly 10 points, Gabe DeVoe reached the 600-point mark of his career.