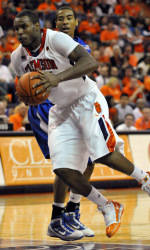 “My shot just felt good, even in warmups,” the senior said after scoring 17 points and hitting five 3-pointers. “It just felt good from the beginning, so I was just shooting.”

The Tigers hit 10 3s in all, most on wide open looks, and buried the Flames from the opening tip at 10 a.m. They led 17-1 before Liberty got its first field goal, and 42-19 at halftime, giving them more points than their smothering defense allowed in 40 minutes.

Potter needed only eight minutes to match his career high of 12 points. He made four 3-pointers, and later added another 3-pointer and a layup.

“He’s one of the guys that we’re looking to and he certainly delivered,” Clemson coach Oliver Purnell said of the senior, whose other 12-point game came in his freshman debut.

The Tigers (2-0), who needed to rally late last year to beat the Flames at Clemson, had no such issues this time. They led by 30 points or more for the last 16 minutes.

Liberty (1-2), which got 24 points from freshman sensation Seth Curry in the 80-75 loss at Littlejohn Coliseum last season, could have used him again in the rematch. Curry, however, transferred to Duke after the season, seeking a higher level of competition.

Clemson, a rival of the Blue Devils in the Atlantic Coast Conference, showed what he will face. The victory was the 28th in a row in November for the Tigers under Purnell, a streak dating to his second season in 2004, and Tigers made it happen with their tight defense.

Trevor Booker was the only other Clemson player in double figures with 12 points and 12 rebounds, but 14 Tigers played and starting center Jerai Grant was the only one not to score.

Jesse Sanders led the Flames with seven points but also had nine of their 28 turnovers. Kyle Ohman, the Flames top scorer with a 19-point average, had just 4 on 1-for-9 shooting.

“I missed a few layups, I missed a wide open three,” Ohman said. “Every shooter ha a bad night, well, bad morning this morning. I guess it just happened to hit me today.”

Sanders felt he was due a big share of the blame for being sloppy, but said the key for the Flames will be seeing how they respond. They play Old Dominion and at Notre Dame next.

“Now we really get to see what we’re made of, who we are,” he said. “We’ll see tomorrow in practice who’s ready to work because everybody’s bottom of the barrel right now.

“We got beat by 40 on national television with our families, all our friends watching, our whole school out there supporting us, and we just got stomped.”

And it surely wasn’t just the point guard.

Harassed by Clemson’s defense and full court pressure, Liberty missed its first nine shots from the field and never got into it. They finished shooting just 30 percent overall.

The point total was the second-lowest for Liberty in the Vines Center. The Flames scored just 38 in a loss to the College of Charleston in 1991.

The game started at 10:05 a.m., and students who attended and stayed until the end were given a stamped card on the way out that excused their absence from morning classes.