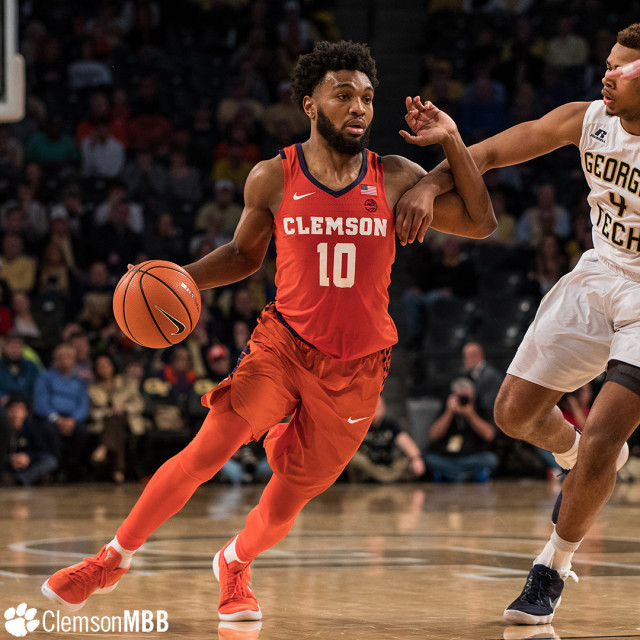 No. 20 Tigers Travel to Wake Forest

• Clemson trails the all-time series 99-61, however, the Tigers have won four in a row and 9-of-the-last-10 contests.
• Last season the Tigers swept the season series from the Demon Deacons, including a 95-83 win in Winston-Salem.
• The Tigers lost 87-79 earlier this season in Chapel Hill.
• Gabe DeVoe notched back-to-back games with five 3-pointers in wins over Georgia Tech (Jan. 28) and North Carolina (Jan. 30).
• He is the first player since 2008 to make at least five threes in back-to-back games – tying Terrence Oglesby.

SERIES HISTORY
CU Series W-L record: Clemson is 61-99 all-time against Wake Forest.
Streak: The Tigers have won four in a row and 9-of-the-last-10.

TIGER TRACKS
• Clemson is ranked for the fifth consecutive week in the AP Top 25 poll (No. 20). Clemson is also ranked in the USA Today Coaches Poll at No. 20
• Clemson’s RPI checks in at fifth nationally.
• With a win over North Carolina on Jan. 30, the Tigers have now begun ACC play 7-3.
• Clemson tied the school record for most threes made by the home team in Littlejohn Coliseum with that performance against UNC
• It is the seventh time in Clemson history (in 64 ACC seasons) that a Tiger team has started league play with at least a 7-3 record through 10 games.
• Clemson guard Marcquise Reed led Clemson in scoring, rebounding and assists in the win over North Carolina. We refer to that accomplishment as a “Triple Leadership”, a rare occurrence. It marked the first time in almost exactly 10 years that a Clemson player had a “Triple Leadership” at home.
• In the latest KenPom rankings, the Tigers are ranked Nos. 16, 16 and 33 in overall, adjusted defensive efficiency (94.0) and adjusted offensive efficiency (114.7).