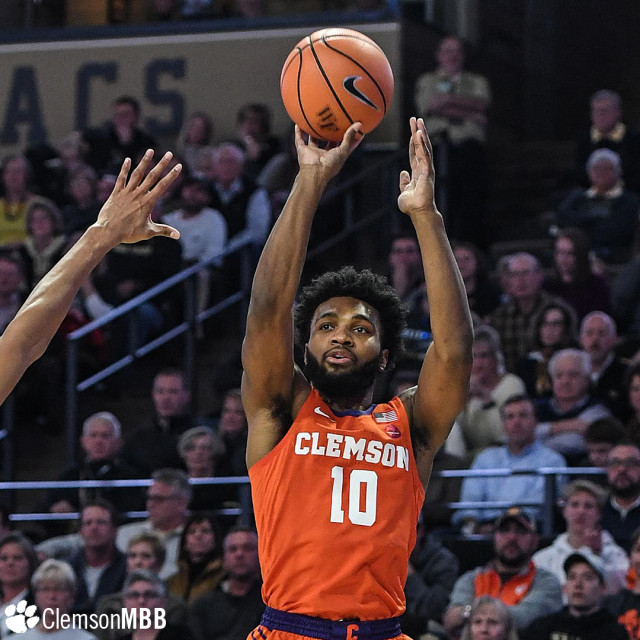 The Tigers (19-4, 8-3 ACC) were led by Gabe DeVoe who stayed hot with 24 points on 8-for-11 shooting, including 5-for-7 from long range. DeVoe’s long range sniping has now contributed to a Tigers team that has made at least 10 3-point field goals in three consecutive games for the first time since 1983.

Marcquise Reed finished with 18 of his 22 total points in the second half, including six free throws in the last 3:39 of regulation. Reed also shared the rebounding lead with Elijah Thomas, adding seven boards.

Shelton Mitchell added in 10 points and five boards in the effort.

After taking a 35-30 lead into the locker room, DeVoe began the second half hitting three free throws after being fouled in the act of shooting. It opened up Clemson’s largest lead of the game to that point at eight.

With the Tigers trailing 61-58 and 7:08 left in the game, Clemson went on a small 7-3 run sparked by a DeVoe three and a Reed layup. In the last four minutes of the game, the Tigers shot 10-for-11 at the foul line in the waning moments of the game to help seal the victory.

Clemson returns the court on Thursday, Feb. 8 at 7 p.m. when it hosts Pittsburgh.

Notes: The win improves Clemson to 8-3 in the ACC for the first time since 1996-97 … also with the win and Duke’s loss on Saturday to St. John’s – the Tigers own sole possession of second place in the ACC … as it currently stands, Clemson would own the largest preseason to postseason ranking differential in ACC history of +11 (Clemson was picked to finish 13th in the preseason) … Clemson has now made at least 10 3-point field goals in three consecutive games for the first time since 1983 … Gabe DeVoe has been lights out this week and that continued with a game-high 24 points shooting 8-for-11 from the field and 5-for-7 from distance … for the week, DeVoe has shot 24-of-38 from the field and 15-of-23 from three … his 24 points is the second-highest total of the season for the senior … Reed poured in 22 points – his seventh 20-point game of the season.