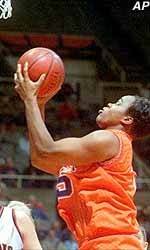 With the win, Clemson improves to 15-4 overall, 6-2 in the ACC. Florida State falls to 11-6 overall, 3-4 in league play. Clemson is ranked 20th in both the Associated Press and USA Today polls.

Clemson took a 24-21 lead with 5:48 left to go in the first half. From this point, Clemson outscored the Seminoles 14-4 to take a 38-25 lead at the half. Julie Alderhold had five points in the Lady Tiger rally.

Florida State narrowed Clemson’s lead to five points 44-39 with 14:13 remaining in the game, as Shinikki Whiting scored a three point basket. Clemson outscored Florida State 13-6 and took a 57-45 lead with 9:52 remaining. Alderhold again had five points in the Clemson run.

In the next 6:36, Clemson outscored Florida State 18-5 and built its largest lead of the game, 75-50 (25 points) with 3:16 left. Andrea Gaines led the way for Clemson in this rally as she scored eight points.

Florida State was led in scoring by April Taylor with 18 points. Katelyn Vujas had 16 points for the Seminoles. Florida State won the battle of the boards 44-43 behind Vujas and Levys Torres as both players had 14 rebounds each. Erin Batth had 13 rebounds to lead Clemson.

“I thought our pressing defense was a big part in today’s game,” said Clemson Head Coach Jim Davis. “We were able to force 27 turnovers and this generated easy baskets for us on the other end. I was disappointed in our rebounding. I was pleased with our defensive effort today. Chrissy Floyd had a great game offensively especially in the second half. Her transition game was excellent. Our execution in the half court was good today. I thought Erin had another fine game rebounding the ball as she had 13 boards for us today.”

Clemson will play at Duke Sunday afternoon at 1:00 p.m. in the Lady Tigers’ next action.