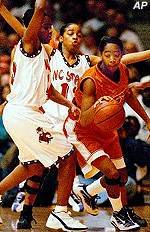 LAHAINA, Hawaii – Tamika Catchings, despite playing only 16 minutes because of first-half foul trouble and a second-half injury, scored 20 points to lead No. 2 Tennessee to an 86-58 victory over Clemson on Friday in the opening round of the women’s Maui Invitational.

Catchings, the reigning national player of the year and a preseason All-America for the third straight season, picked up her second foul six minutes into the game and went to the bench for the rest of the half.

Catchings injured her left, non-shooting hand with about 15 minutes to play and spent the next several minutes being attended to on the bench. When she returned with 9:12 to play and her second and third fingers taped together, it took her all of 23 seconds to score on a rebound that made it 68-50. After Marci Glenney of Clemson (0-2) made one of two free throws, Catchings hit a jumper and then made two free throws to extend the lead to 72-51.

Tennessee advanced to Saturday’s championship game against No. 21 Illinois, which beat Alcorn State 73-56 in the opening game.

The Lady Vols will again be without starting guard Semeka Randall and reserve center Shalon Pillow, neither of whom made the trip for violating team rules.

Kara Lawson and Kristin Clement each had 11 points for Tennessee, which shot 51.6 percent (32-for-62) and finished with a 53-35 advantage on the boards.

Clemson led 34-33 late in the first half before Tennessee’s Kara Lawson hit a 3-pointer with 20 seconds left and Michelle Snow scored on a rebound at the buzzer to give the Lady Vols a 38-34 lead despite only having had Catchings for the six minutes because of the two fouls.