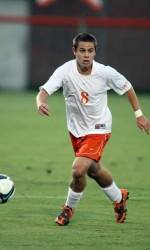 CLEMSON, SC – Billy Schuler scored one goal and assisted on another in leading #2-ranked North Carolina to a 3-1 win over Clemson in an Atlantic Coast Conference men’s soccer match at Clemson, SC Friday night.

Clemson scored first in the 53rd minute as Eric Cava looped a pass to Riley Sumpter. Sumpter headed the ball in from close range to give the Tigers a 1-0 lead.

The Tar Heels scored three unanswered goals within a 15:04 time span. Jordan Graye scored his second goal of the season on a set play. Kirk Urso sent a free kick into the box near the left post. Graye headed the ball into the netting to tie the score.

At the 73:39 mark, Schuler drove down the right side, towards the right post. He then sent a shot from a severe angle to the left wall of the net for his eighth goal of the season.

North Carolina scored exactly six minutes later as Schuler sent a pass to Martin Murphy inside the box. Murphy fired a shot into the goal for his second of the season.

“North Carolina has an exceptional team,” said Clemson Head Coach Phil Hindson. “We truly had some great opportunities. We needed to score the second goal. It’s hard to hold on to a 1-0 advantage against a team like North Carolina. Technically, they are as good as it gets up front in college soccer. We battled, and I think we gave it every thing that we had tonight. It was there for us, but we came up short—that¹s the story of our season.”