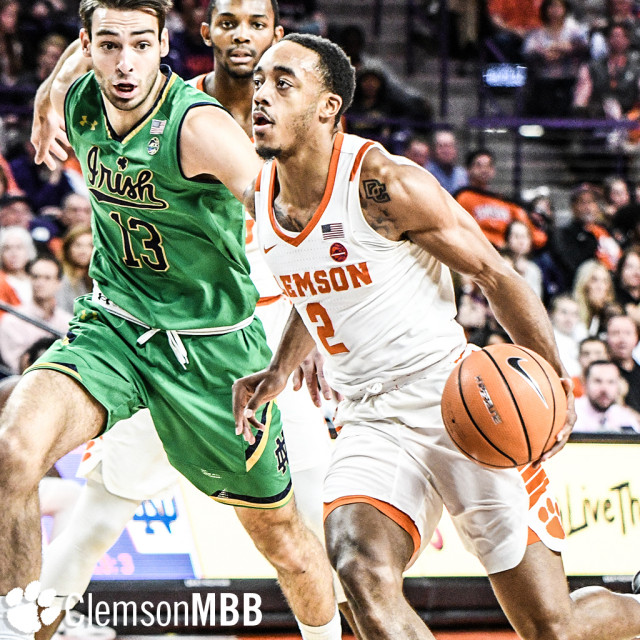 No. 19 Tigers Take on BC in ACC Quarterfinals

• No. 4 seeded Clemson will face-off against No. 12 seeded Boston College in the quarterfinals of the ACC tournament this afternoon.
• The Tigers won 74-70 at BC earlier this season.
• Head coach Brad Brownell is 8-3 against Boston College in his career.
• Clemson is 2-0 all-time against the Eagles in the ACC Tournament with meetings in 2008 and 2011.
• The last meeting between both in ACC tournament play was during head coach Brad Brownell’s first year at Clemson and ended up as a 70-47 win for the Tigers.

SERIES HISTORY
CU Series W-L record: Clemson is 16-7 all-time against Boston College.
Streak: The Tigers have won six in a row over the Eagles.

TIGER TRACKS
• Clemson clinched its first top-four seeding at the ACC Tournament since 2011 when head coach Brad Brownell was in his first season at Clemson.
• The Tigers were predicted to finish 13th in the ACC according to the media during the preseason and proceeded to finish tied for 3rd. The jump of 10 places from preseason to postseason is the largest in ACC history since the preseason poll was inaugurated in 1970.
• A trio of Tigers earned All-ACC recognition: Marcquise Reed (second team), Gabe DeVoe (honorable mention) and Elijah Thomas (all-defensive team).
• Marcquise Reed tallied his 11th 20-point outing of the season with 21 points in the regular season finale at Syracuse.
• Gabe DeVoe remains 11th all-time in the Clemson record book for threes in a career (154). He needs just one more to tie for 10th.
• The Tigers’ win over Florida State marked a new program record for ACC wins during the regular season with 11. The 11 wins ties for the most all-time in any conference for Clemson. (Posted 11 wins in the Southern Conference in 1951-52).