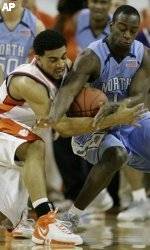 Wright, the Atlantic Coast Conference leader in field goal percentage, was a miserable 1-of-8 in a loss to Virginia Tech last Saturday that cost the Tar Heels their perfect conference mark and No. 1 ranking.

Wright shook that off by scoring 17 points on 8-of-10 shooting to help the fourth-ranked Tar Heels recover with a 77-55 victory over No. 19 Clemson on Wednesday night.

“That’s not the type of team that we are,” Wright said referring to the 94-88 loss to the Hokies. “We wanted to show who we were. We put that behind us and took it to the next game.”

Less than a week ago, Clemson had been 17-0 and the nation’s only Division I unbeaten. The perfect record ended last Saturday with a 92-87 loss at Maryland. And the Tar Heels’ speed and pressure made sure the Tigers wouldn’t start another winning streak.

“If people want to run with us, we can run with them. That’s what we want to do,” North Carolina guard Wes Miller said.

The Tar Heels’ quickness turned what was expected to be a tight game into a laugher.

Instead, it was North Carolina freshmen Wayne Ellington and Ty Lawson pushing the pace with Wright on the other end to finish.

Wright had three inside baskets as North Carolina closed the opening half with a 20-9 run. The last of those field goals put the Tar Heels ahead 44-31.

“I try and come out focused every day,” Wright said. “I come out with the mind-set to play hard every play.”

Wright hit three baskets over the first 3 minutes of the second half as the lead increased to 54-35.

K.C. Rivers. Clemson’s leading scorer, was held to four points, nearly 12 below his average. James Mays and Hammonds both had 15 points for the Tigers, who went 5-of-19 from the free throw line.

Part of Rivers’ problem was a sore back the reserve is dealing with, Clemson coach Oliver Purnell said.

Tar Heels coach Roy Williams said Hansbrough took a hard fall in practice that was serious enough to keep him out if the game had been played a day earlier. Instead, Hansbrough moved freely throughout.

“We wanted to come back and bounce back strong,” Hansbrough said. “Nothing’s going to take away that Virginia Tech feeling, but this is supposed to be the way we feel.”

The sellout crowd at Littlejohn was loud – and it got even louder when the Tigers hit their first two shots. But the Tar Heels followed with a 19-10 run to take a lead they would never give up. Reyshawn Terry had a three-point play early in the stretch and closed it with a 3 to give North Carolina a 19-14 lead.

Clemson got it to 24-22 on a 3-pointer by Hammonds, but the Tar Heels set off on their decisive run over the final 6 minutes of the half that quieted the mostly orange-clad fans.

Tar Heels sophomore guard Bobby Frasor did not play. He aggravated a sore right foot in the loss to Virginia Tech.

Purnell said it was essential for his team to understand that poor shooting and one of the top-ranked teams in the country knocked them askew. But the Tigers are far from done in the chase for the ACC title.

Should Clemson win Saturday’s game with first-place Boston College, “we all look at this through a different lens,” Purnell said.