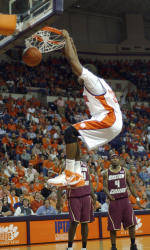 No. 19 Clemson to Host Virginia in an ACC Showdown

Clemson has a 4-3 record in the month of January. A victory onSunday would give Clemson a winning record in January for the firsttime since 1997 when it had a 6-2 record. While Sunday’s game isthe last game in the month of January it is also the last game inthe first half of the 16-game ACC schedule. Clemson has a chance tohave a winning first half of the ACC schedule with a win overVirginia. Clemson has had a winning ledger the first half of theACC schedule just once (6-2 in 1996-97) since the ACC when to a16-game league schedule in 1991-92. Clemson is ranked in the top 20of both polls this week, the fifth straight week it has been rankedin the top 25 of both polls. Clemson was 14th in RPI and 11th inSagarin entering games of Friday, January 27. Virginia has won fiveof the last six in the series with Clemson, but the Tigers won thelast meeting, 90- 64 at Clemson last year. That was Clemson’slargest margin of victory against the Cavaliers since a 27-pointvictory (99-72) in 1964-65. Clemson made 10-11 free throws in itsloss at Duke, its top single game free throw shooting game sinceOliver Purnell became head coach at Clemson. Clemson out-shot10th-ranked Duke in field goal percentage, free throw percentageand three-point percentage and had four less turnovers, but lostthe game. It marked the first time since this year’s win at SouthCarolina that Clemson had won all three shooting statistics in thesame game. James Mays has scored at least 13 points in sevenstraight games and has averaged 16 points per game during thatseven-game streak. Vernon Hamilton led Clemson with 21 points atDuke and now has 52 points in his last two games against the BlueDevils. Hamilton is now averaging 16.3 points per game and shooting58.5 percent from the field in road games this year. Clemson is11-1 at home this year and has won 15 of the last 16 over twoyears. The only loss was to fourth-ranked North Carolina earlierthis year. A victory on Sunday would give Clemson 19 wins,equalling the total the Tigers had all of last year. James Mays hadfive assists at Duke and now has 54 for the season. He is just 15short of the Clemson record for a post player. Virginia’s backcourtof Sean Singletary and J.R. Reynolds averages 37 points per gameand combined for 56 points in its most recent game against NCState. Clemson’s backcourt duo of Vernon Hamilton and CliffHammonds has combined for 81 steals and both players rank in thetop 10 in the ACC in that category.