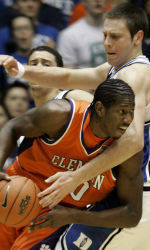 McClure’s basket capped a wild final 13 seconds for the Blue Devils (17-3, 4-2 Atlantic Coast Conference), who blew a five-point lead before answering with the sophomore’s stunning basket.

With the score tied at 66 after Vernon Hamilton erased the deficit with a layup and a 3-pointer, Josh McRoberts inbounded the ball with 4.4 seconds left to freshman Jon Scheyer. Scheyer pushed the ball near midcourt, then sent a pass ahead to McClure.

McClure, who had a step on Hamilton, laid it up over the outstretched arms of K.C. Rivers for the win as the horn sounded.

Duke’s players immediately spilled onto the floor in celebration and mobbed McClure, while Clemson’s players walked back toward their bench in stunned silence.

Duke looked on its way to the win when freshman Gerald Henderson hit two free throws to make it 66-61 with 12.7 seconds left. Hamilton scored a layup to cut the deficit to three with 5 seconds left, then stole McRoberts’ inbounds pass and buried a tying 3-pointer with 1.8 seconds left.

But officials stopped play to review the time left and restored the clock to 4.4 seconds left, setting up the final play.

McRoberts led Duke with 17 points while McClure finished with eight points and six rebounds in 34 minutes off the bench. The Blue Devils shot just 41 percent, but kept control of the game with a 40-24 rebounding advantage – including a 17-6 edge on the offensive boards that led to a 19-4 edge in second-chance points.

Clemson had several chances in the final minutes, tying the game at 60 when James Mays stole the ball in the Tigers’ fullcourt pressure and hitting a layup with 3:30 left.

Scheyer hit a pair of free throws on the next possession to put Duke back ahead at 62-60. Then, after Mays made a free throw to cut the deficit to one, Clemson’s Cliff Hammonds missed shots for the lead on consecutive possessions while Rivers missed an open 3-pointer with about a minute left.