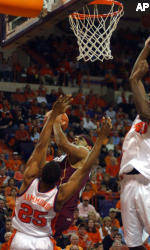 CLEMSON, S.C. (AP) -Clemson coach Oliver Purnell had his Tigers ready for this one, no matter who Boston College brought to Littlejohn Coliseum.

With two straight defeats following a 17-0 start – including a 77-55 flop in a hyped showdown against North Carolina on Wednesday – Purnell lit into his players during a team meeting and challenged them to play the way they had been earlier.

Purnell’s harsh words at practice carried into the game. Cliff Hammonds had 17 points, James Mays added 14 with Williams’ there to patrol the paint and the Tigers got 13 steals compared to eight turnovers.

“After the way coach attacked us, we had no choice but to come out and play better” than against the Tar Heels, Clemson point guard Vernon Hamilton said.

The Tigers (18-2, 4-2 ACC) were run ragged by the Tar Heels, going for steals and then watching as North Carolina’s forwards finished for easy buckets.

This time, it was Clemson with the open looks and easy shots. A big reason was the space in Boston College’s attack usually eaten up by Williams, their 6-foot-10 shot-blocking center who was dismissed this week for violating unspecified team rules.

Williams was third in the country at five blocks a game and averaged 12.1 points. Without him, Hammonds was left alone for several 3-pointers in the first half while Mays and Trevor Booker took over the paint down the stretch.

While Boston College coach Al Skinner said his team may have been distracted by Williams’ dismissal, it was poor execution that ended their perfect ACC start.

“This is who we’re going to be for the rest of the year and we’ll have to adjust,” he said.

Jared Dudley, the ACC’s leading scorer, was held to 13 points, nearly 7 fewer than his 19.8 average coming in.

“You could have Ben Wallce out there, if it’s a wide-open three, they’ll hit the shot,” Dudley said.

Purnell liked the intensity he saw out of his team in a game critical for the team’s psyche with a road trip to Duke coming up next week.

“We got a first-place team coming into our house on a Saturday afternoon,” Purnell said. “Our guys think this should happen. We should be a tough out here.”

With Hammonds connecting outside, and Mays and Booker, the Tigers certainly are.

Hammonds matched his career high with five 3-pointers. Several times in the second half, the 6-9 Mays and 6-7 Booker went unchallenged down the lane for layups.

Hammonds had four first-half 3s as the Tigers built a 41-33 lead. Mays had four baskets and Booker two during Clemson’s 19-12 run to start the second half that put the game away.

Hammonds said Purnell told the team they hadn’t been focused on their goals and gotten lax in preparation.

“The way he had to do it was to go in the hallways with some tough love,” Hammonds said. “Now we’re back on the right track.”

Tyrese Rice had 16 points to lead the Eagles, who had only five scorers.

Shamari Spears, a freshman starting in place of Williams, had 14 points and six rebounds for the Eagles. Vernon Hamilton added 13 points for the Tigers.

Early on, Boston College played crisply with Spears in the middle. The Eagles made four of their first five shots and led 12-7. But Clemson found its outside shooting touch, using Hammonds’ accuracy – he was 4-for-5 beyond the arc in the opening half – to close the half with a 34-21 run.

Hammonds sandwiched a pair of 3s around Booker’s inside shot to pull Clemson in front for the first time, 19-18. Hammonds added two more long shots and the lead grew to 30-24.

Sean Marshall’s 3 moved Boston College back within 36-33. But Hamilton had his second 3 of the half and K.C. Rivers broke away for layup with less than 6 seconds to go before the half.

Dudley said the Eagles will learn to play without their big center.