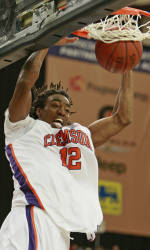 ATLANTA (AP) – Georgia Tech is hoping to pull off a Georgia-like run through the Atlantic Coast Conference tournament.

One down, three to go.

Lewis Clinch set a career high with 32 points and the last-place Yellow Jackets pulled off the first upset of the ACC tournament, beating No. 17 Clemson 86-81 in the opening round Thursday.

Clinch made five 3-pointers to carry the Yellow Jackets (12-18), who went 2-14 in the ACC during the regular season – including a pair of losses to the Tigers. He capped his performance with a pair of clinching free throws, eclipsing his career high of 30 points against Miami just eight days earlier.

“I was open,” Clinch said. “If I have open looks, I’m supposed to knock them down.”

After equaling the most ACC losses in school history during the regular season, Georgia Tech has a chance to match its win total in just two days. The Yellow Jackets advanced to face No. 22 Florida State in the quarterfinals Friday.

Actually, the outcome wasn’t that much of a surprise. For the third time in four years, the 12th-seeded team in the tournament opened with an upset of the No. 5 seed. And Clemson failed again to win the most prestigious of league tournaments on its 56th try – the only original member of the ACC lacking a championship.

Gani Lawal added 20 points and 14 rebounds for the Yellow Jackets, who are well aware of what state rival Georgia did at last year’s Southeastern Conference tournament in Atlanta.

The last-place Bulldogs won four straight games to earn an NCAA bid in a tournament interrupted by a devastating tornado that struck the Georgia Dome. The final two days of the tournament were shifted to Georgia Tech’s campus arena, where the Bulldogs wrapped up their improbable championship.

Clemson (23-8) made it to the ACC title game a year ago before losing to North Carolina, but they were one-and-done at the Dome and will head to the NCAAs mired in a major slump. The Tigers have lost four of their last five, which will hardly impress the seeding committee.

“We need to step up and we need to play together,” sophomore Terrence Oglesby said. “If we don’t decide to do that, then it’s going to be a struggle.”

Trevor Booker paced Clemson with 17 points. Five other Tigers were in double figures, including Oglesby with 11, but it wasn’t enough to handle the inside-outside attack of Lawal and Clinch.

On their last visit to Atlanta, Clemson overcame a 15-point deficit to beat the Yellow Jackets 81-73. But, playing about two miles from the Georgia Tech campus, the home team finally got the best of the Tigers.

After the first half ended in a 39-39 tie, Clinch got the Yellow Jackets rolling with a 3-pointer. When Zachery Peacock followed with a dunk, Clemson quickly called a timeout in hopes of stemming the momentum.

But Clinch kept hitting shots, and Georgia Tech kept stretching its lead. The senior hit another 3 with 3:50 remaining to give the Yellow Jackets their biggest lead of the game, 75-62.

Clemson tried to rally, closing to 84-81 on Andre Young’s long trey with 7 seconds remaining. Clinch was quickly fouled on the inbounds, but he calmly knocked down both free throws to finish off the Tigers.

“Every time they had a punch, we reacted with a punch of our own,” Lawal said. “We have to be really aggressive against Florida State.”

Georgia Tech shot a season-beat 55.7 percent (34-61) from the field, beating Clemson’s press for a number of dunks and easy baskets underneath. The Yellow Jackets also controlled the boards, outrebounding the Tigers 38-30, which helped offset 17 turnovers.

“If we execute,” Peacock said, “we’ll get another win.”

The Tigers had no reply for Clinch, who fired up shots from all over the court. He was 5-of-12 from beyond the arc, 11-of-20 overall and also knocked down all five of his free throws.

Clemson did have an unexpected fan – NFL star Terrell Owens, who has a home in Atlanta and came out with a friend to root for the Tigers. Wearing a yellow shirt and dark shades, the newly signed Buffalo Bills receiver stood out in the orange-clad section but wasn’t much help. Afterward, he declined to speak with reporters or sign autographs.

The only major stumble by the Yellow Jackets came with about 1 1/2 minutes to go. The 6-foot-10 Aminu picked off a pass near midcourt, dribbled in for what should have been a thunderous dunk, only to decide at the last second to lay it off the backboard. He missed.

Aminu caught plenty of good-natured grief from his teammates afterward.

“I figured I’d better get the easy basket,” he explained. “The next time I have the opportunity, it will be a dunk.”

The Tigers will spend the next few days trying to figure out what went wrong late in the season. If they keep playing like this, they’ll have another short stay in the NCAA tournament.