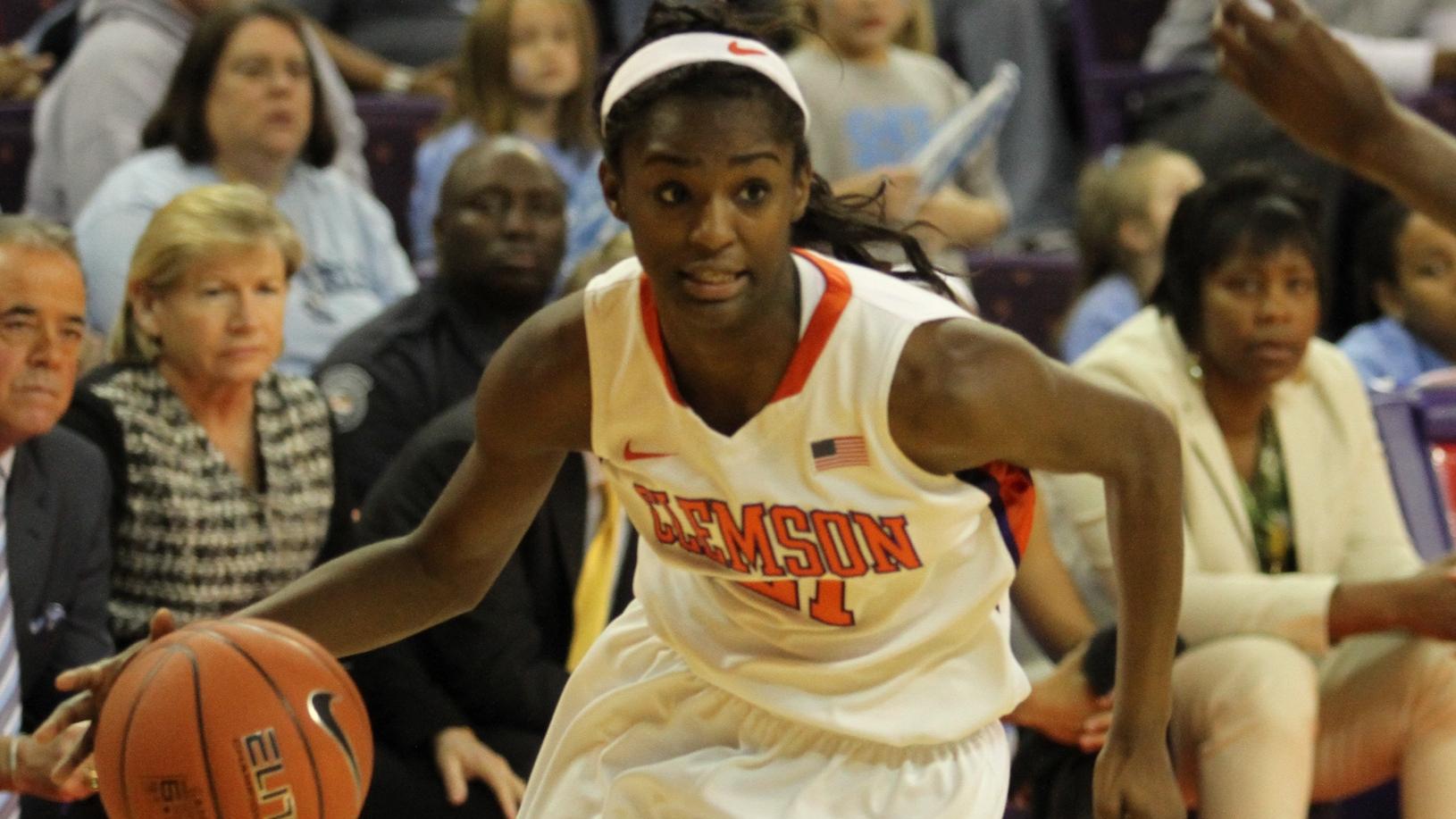 No. 16 North Carolina Slips Past Clemson on Sunday

After North Carolina took a 58-50 lead with 3:25 to play, Clemson pared it down to just two points just over a minute later. However, Clemson could not get over the hump, committing six turnovers in the final two minutes as UNC held on for the win.

“We were careless with the ball at times,” said head coach Itoro Coleman, who was making her bid for a win over a ranked Tar Heel squad for the second straight season. “We were forcing a lot of passes. It didn’t have much to do with our offense, except that we were trying to force some things that weren’t there.”

Clemson finished with a season-high 35 turnovers, leading to 36 of the Tar Heels’ points.

Nikki Dixon led Clemson with 22 points, becoming the fastest player to reach 500 career points since Chrissy Floyd in 2001 did it in 39 games. Dixon was also playing in her 39th career game.

She shot 10-10 from the line in the contest, the second-best free throw game in school history. She tied four other players with the same mark, and trailing only her coach, Itoro Coleman, who went 12-12 in a game, also against North Carolina, in 1998.

Another stand-out statistically for Clemson was Quinyotta Pettaway, who pulled down 18 rebounds to go with ten points, her second straight double-double. The 18 rebounds were a career-high, and tied for the most among any ACC player this season.

“Yotta is very capable of having 18 rebounds,” said Coleman “She always finds the ball and does a great job of going up to get the ball in traffic.”

Charmaine Tay, playing in her second game for the Tigers, scored ten points, and had seven rebounds, five assists, and four steals. The four steals are a career-high, while the ten points and five assists are both the second-best marks of her career, including her time at Louisville. She also attempted 10 free throws, a career-high, and has gone to the line 19 times in two games.

Clemson controlled the glass, as the Tar Heels were outrebounded for just the third time in 14 games this season. Poor (13-27, .481) free throw shooting by the Heels kept Clemson in the game, while the Tigers finished 16-21 (.762) from the line. Clemson had 21 offensive rebounds on 37 missed shots, but the Tar Heels did a tremendous job of defensive recovery, allowing just eight second-chance points, and none in the second half, despite 12 Clemson offensive rebounds.The Tar Heels pushed the pace of the game, but the points on the fast break were just 10-8 in favor of North Carolina. The difference was in points off turnovers, where North Carolina scored 36 points, which amounted to .553 percent of their offense. They also outscored Clemson 26-14 in the paint in the second half as they pulled away. In the first half, it was Clemson with the 24-14 edge in that category.

Clemson took a 4-2 lead early on, as they force ten UNC turnovers in the first four minutes, eight of those on steals. Clemson took a six-point lead into the break after neither side was able to score in the final 1:41.

The Lady Tigers struck first in the second half, taking a 38-28 lead on a runner by Pettaway. UNC scored the next seven, before Clemson again pushed the lead to eight with 14:26 to play. From there, however, Clemson went cold, going scoreless for seven minutes before a pair of Tay free throws stopped the 15-0 run.

The Tar Heels looked like they might pull away, holding a nine-point lead with 5:19 left, but Clemson knocked the deficit to 58-56 on a pair of Dixon free throws with 2:09 to play. From there, Clemson could get no closer, and the Heels knocked down all four of their free throw attempts in the final 30 seconds to set the final margin at 65-58.

Clemson will travel next to Miami for a game on Thursday before returning home for a Sunday showdown with Georgia Tech.

“Every game in the ACC is going to be tough,” said Coleman. “Miami is very aggressive, and they like to speed things up on defense and press, so playing North Carolina was good practice for that.”