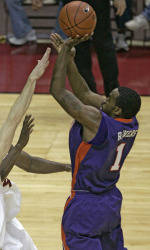 TALLAHASSEE, Fla. (AP) -Toney Douglas scored 23 points and Florida State held off a late Clemson rally, defeating the 12th-ranked Tigers 73-66 on Saturday to get closer to their first NCAA tournament bid in 11 years.

“I’d say we’re in, but we have more games too,” Douglas said afterward. “I know if we’d lost after having an 18-point lead, I’d have cried afterward.”

He has now scored 20 or more points in 11 of Florida State’s last 13 Atlantic Coast Conference games and had 19 the other two times.

“He’s certainly a player of the year candidate,” Clemson coach Oliver Purnell said. “He almost opens up the inside by himself.”

Whether it’s slashing to the basket, scoring a 3-pointer or making a steal, Douglas is arguably the single most disruptive force in the talent-laden Atlantic Coast Conference.

“I don’t think there’s any other player in our league faced with that type of scenario,” Florida State coach Leonard Hamilton said. “The unique and special thing Toney is giving us is tremendous leadership.”

But Douglas is quick to share credit with his younger teammates.

“They come in with tremendous energy and intensity,” Douglas said. “And they’ve got good basketball IQ.”

But then it was Douglas, hitting a half dozen straight free throws to ice the game.

“We got back in it, but it’s like being on a high wire,” Purnell said, lamenting Clemson’s 23 turnovers.

Derwin Kitchen and freshman Chris Singleton each had 10 points for the Seminoles, who swept Clemson for the first time since the 2000-2001 season.

Terrence Oglesby added 12 points for Clemson on 4-of-10 shooting from 3-point distance while Sykes finished with 10 points and four blocked shots.

Douglas, the ACC’s top scorer in conference play, hit six straight free throws in the final 2:48, including four in a row in the final 50 seconds to stop Clemson’s comeback.

“He has our back,” said Singleton, who got all of his points in the second half. “He steps up his game when we need him and leads by example.”

Booker, the Tigers leading scorer on the season, went scoreless until there was just 1:50 left in the half when he hit a close-range scoop shot.

Florida State, which rallied from a 19-point deficit with under 15 minutes left in the game three weeks ago at Clemson to win 65-61, clinched just its second winning ACC record in the past 16 years.

The Seminoles capitalized on a 25-7 run to build a 14-point lead in the first half.

At halftime, Florida State retired the jersey No. 33 worn by Ron King, who led the Seminoles to the 1972 national title game and still holds the school’s single-game scoring record of 46 points.

Florida State visits Duke on Tuesday and closes its regular season at home next Sunday against Virginia Tech.

Clemson hosts Virginia on Tuesday and finishes next Sunday at Wake Forest.

“We’ve got to get back home and take care of business,” Purnell said.