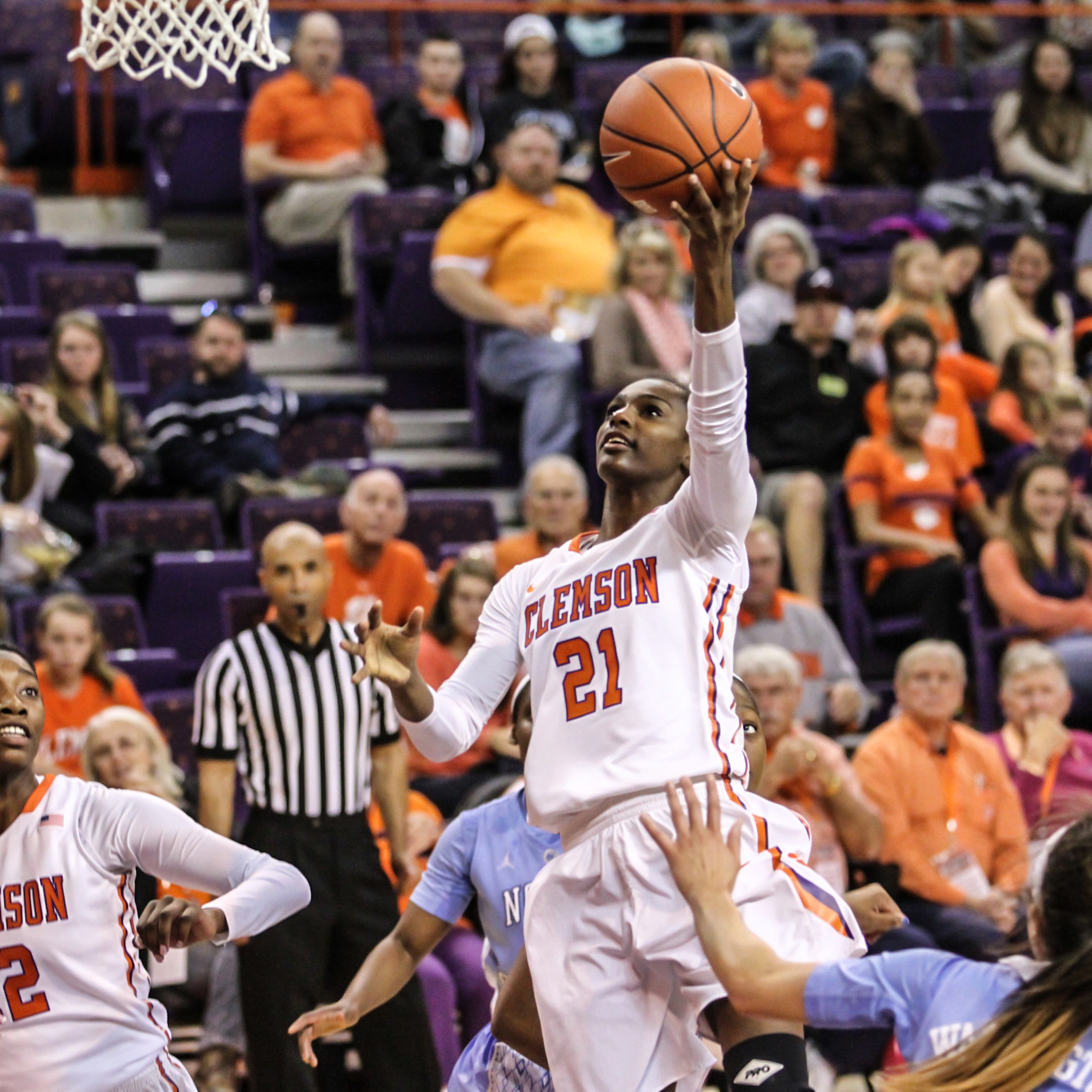 CLEMSON, S.C. – Senior Nikki Dixon moved into 10th place on Clemson’s all-time scoring list, but the Tigers’ (9-10, 1-5 ACC) cold first half from the field propelled No. 10/12 North Carolina a 78-56 win in Littlejohn Coliseum. North Carolina (16-3, 3-2 ACC) hit nine of its first 12 shots to run out to a 24-6 lead and never looked back. Nearly 1400 spectators came to the game, which featured appearances from 15 area mascots, who participated in promotions and played a game at halftime.

The Tigers played the second half relatively evenly, but weren’t able to get closer than 17 points the rest of the contest after falling behind by as many as 24 in the first half. Dixon scored her 17 points despite making just two field goals, as she knocked in 13 of 14 free throw attempts. The Tigers hit just 7-30 (.233) from the field in the opening stanza, which staked the Heels to a 45-24 lead at the break.

The 13 makes for Dixon are a career-high and a season-high by any ACC player in league play. She entered the game needing just four points to pass Kerry Boyatt, and after picking up three points and three fouls in the first half, her jumper five minutes into the second half moved her past the mark. She’d go on to hit 10-10 from the line in the half and is 12 points shy of Bobbie Mims for 9th all-time.

Tiffany Lewis had 13 points, her eighth game of the season in double-figures, and made five of her 10 field goal attempts, including a pair of threes. The sophomore also added four rebounds in 30 minutes of play. Cha’nelle Perry had eight points and a pair of steals, while Francesca Tagliapietra added six points.

The road doesn’t get much easier for the Tigers, who welcome No. 7 Notre Dame to Littlejohn next Saturday at 5 p.m. in the second game of a basketball doubleheader.

“In the second we were able to settle down a little bit. We were getting good looks but we just couldn’t knock down shots. We emphasized at halftime that we have to attack the basket. Dixon got a lot of her points from the free throw line because she attacked the basket. And that was a big difference. We got to the line 22 times and executed a lot better.”

I keep telling them that we’re going to take our lumps, and that what we have to do is have teamwork on the things we can continue to improve on, so that when we have an opportunity to snatch a game away, then we’ll be ready for it.”

“The biggest thing for us right now is confidence. The staff and myself have to continue to keep these players’ confidence up. We’re continuing to teach and work on the things we’re best at so that we can do well and do what we need to in order to be successful. We were much better defensively in the second half, we communicated better, and that’s what we’re going to continue to work on. I felt that in the second half we got better as a team.”

The Clemson Tigers fought hard against the #10/12 North Carolina Tar Heels, but could not overcome a first half in which the Tar Heels shot 55% from the floor and made six three pointers. Despite a slow start for the Tigers, Clemson held their own in the second half, scoring 32 points and holding North Carolina to 33 points. The Clemson attack was led by senior Nikki Dixon (17 pts) and sophomore Tiffany Lewis (13 pts). Dixon who has been a major part of Clemson’s offensive attack all season, made a career-high 13 free throws. The senior has led the Tigers in scoring in every ACC contest this season.

On the surface, there might not appear be too many positives to take from this loss to the nationally ranked Tar Heels. However, from what I saw, Clemson fought hard throughout the entirety of the game and did not stop competing even when North Carolina was up by 20 points. Clemson’s young student-athletes will learn from their first battle against a top 10 team and the experience gained will prove to be valuable this season and seasons to come. Furthermore, the atmosphere in Littlejohn Coliseum today was electric, as 1,392 fans attended the game, the highest attendance this season. Clemson will need even more fan support next Saturday as the Tigers take on #7 Notre Dame in Littlejohn at 5 pm.