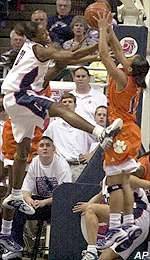 STORRS, Conn. – The backcourt combination of Sue Bird and Shea Ralph combined for 31 points Sunday night to lead #1 ranked Connecticut to a 83-45 victory over #9 seed Clemson at the Gampel Pavilion in Storrs, CT.

It was the third meeting between the two teams and all three have been in the NCAA Tournament. Clemson won at Storrs in the 1990 event, one of just two home NCAA Tournament losses in history for the Huskies. Connecticut won the next year in Philadelphia in a contest that decided a trip to the Final Four.

Clemson concluded the season with a 19-12 record, while UCONN improves to 32-1. Connecticut is ranked number-one in the nation and moves on to the Sweet 16 of the NCAA Tournament. It was virtually an average victory for UCONN who has defeated its opposition by an average of 86-54 this season.

Clemson was led by freshman Chrissy Floyd, who scored 13 points, all in the second half. Starting point guard Crystal Scott added nine points, all in the second half. Clemson was held to just 10 field goals by Connecticut’s defense, ranked among the best in the country. After Clemson took a 2-0 lead early in the first half, Connecticut went on a 14-0 run and took a 14-2 lead with 11:56 left to go. Clemson was 1-2 from the field in the early going but missed their next 10 field goal attempts. During this time, Connecticut was 4-14 from the floor but started hitting from the free throw line as the Huskies were 6-6 from the charity stripe in this stretch. Connecticut took a 21-9 lead with 7:50 left to go as Svetlana Abrosimova hit a three-point field goal. From this point, the Huskies went on a 23-8 rally and took a 44-17 advantage into the lockerroom. Sue Bird scored 10 points in the late run for Connecticut.

The lead varied between 24 and 33 points over the first 15 minutes of the second half. UCONN extended its lead to 78-43 on a driving layup by Shea Ralph with 3:05 left before the Connecticut coaching staff put in its subs.. Clemson had cut the lead to 24 with 14:08 remaining on a three-point goal by Crystal Scott, but that was as close as Clemson could get. The largest lead of the game was the final score.

Connecticut shot 51 percent from the field for the game, second highest against Clemson this year, but below their season average of 54 percent, best in the country. Clemson shot a season worst 20.4 percent from the field (10-49), in fact the worst percentage in Clemson history. The Lady Tigers were 20-23 from the foul line for 87 percent. Clemson had 27 turnovers for the contest, but did force 21.

UCONN also won the rebound battle 45-26 behind Swintayla Cash, who had a double double with 10 points and 10 rebounds. Clemson’s leading rebounder was guard Krystal Scott, who had six. Floyd’s outside shooting was a highlight for Clemson. The Lady Tiger freshman had made just 18 percent from three-point range entering the game, but was 3-4 Sunday night.