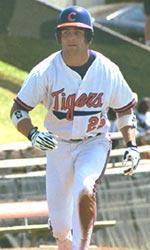 No. 1 Tigers To Play Host to Catamounts & Gamecocks in Mid-Week Games

Top-ranked Clemson (30-4) will play host to Western Carolina (22-12) and #7 South Carolina (28-8) in Mid-week games at Doug Kingsmore Stadium. Clemson will face the Catamounts Tuesday at 7:15 PM and play host to the Gamecocks Wednesday at 7:15 PM. The South Carolina game will be broadcast on the radio on Clemson Tiger Sports Properties, while there is no radio coverage for the Western Carolina game. The broadcast can be heard live via the internet at www.clemsontigers.com. Live stats will also be available on Clemson’s website. The South Carolina game will be broadcast live on television on Comcast Sports Southeast as well.

A limited number of general admission and standing-room only tickets to the South Carolina baseball game will be available starting at 5:00 PM prior to Wednesday’s game. The tickets will be sold only at the left-field gate. Reserve seats are sold out for the game, however, Clemson faculty, students, and staff will still be admitted with University IDs.

Clemson leads the series with Western Carolina 41-8 dating back to 1974. Clemson has won five in a row. Head Coach Jack Leggett is 15-3 against his former team, including 12-0 at Doug Kingsmore Stadium.

Clemson holds a 151-102-2 advantage against South Carolina in the series dating back to 1899. The two schools disagree on the all-time series record, as South Carolina has Clemson with a 149-102-2 lead. The discrepancy is in 1948, when Clemson played two games at South Carolina on May 21 and May 22, with Clemson winning both games. South Carolina’s media guide shows no such games on those dates. Leggett is 16-11 against the Gamecocks as the Tiger skipper, including a 7-6 record at Doug Kingsmore Stadium. Leggett also sports a 49-21 (.700) record against SEC teams, including 30-7 record at home. In his ninth season at Clemson, Leggett has 99 wins over teams ranked in the top 25.

Clemson defeated South Carolina in two games earlier this season by scores of 9-7 and 11-10 (10 innings). Khalil Greene went 6-for-9 with three doubles and a homer in the two games, while Michael Johnson hit three homers and drove in six runs while going 4-for-7.

Western Carolina will start senior righty Dan Foley (2-2, 6.49 ERA) on Tuesday, while the Tigers will counter with sophomore righty Steven Jackson (4-1, 4.87 ERA). Jackson is coming off a relief appearance at #13 North Carolina on Friday, where he pitched 2.1 scoreless and hitless innings to pick up the win.

Western Carolina, who is 4-6 on the road this year, is hitting .346 as a team and is led by outfielder Donovan Minero, who is hitting .419 with 12 homers and 47 RBIs. The Catamounts took two of three games this past weekend against College of Charleston in Cullowhee.

South Carolina, who is 5-5 on the road, is hitting .325 with an outstanding .975 fielding percentage. The Gamecocks are coming off a three-game sweep at Vanderbilt this past weekend. Yaron Peters is the top Gamecock hitter. He is hitting .408 with 14 home runs and 56 RBIs. Drew Meyer is hitting .389 with 21 steals as well.