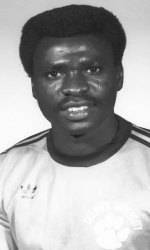 Nwokocha, who was 46 years old, passed away in his native country of Nigeria on April 24, according to his brother Christian Nwokocha.

Nwokocha had been working in eastern Nigeria as an advisor to a Governor of the State for Sport Affairs.

A prolific scorer, he is first on the Clemson career list and second in the ACC for most points with 171. He is also second in school history and third in league history for most goals scored in a career with 74. Nwokocha averaged 1.17 goals per game during his Clemson career. He had four consecutive hat tricks in four matches during the 1980 season. He scored seven game-winning goals in the 1981 season. It took him only 11 games to score 20 goals in the 1979 season. For his career, he had 23 assists. He also had 19 game-winning goals in his career, the second best in school history.

In a feat that will probably never be duplicated, he scored a school record and an ACC record seven goals in one half vs. Belmont Abby on September 9, 1979. He also had two assists in that game as he finished with 16 points, also a school record. He was also named a member of the ACC’s 50th year Anniversary team.