Clemson, S.C. — Current Clemson senior golfer Bryson Nimmer made his debut in a PGA Tour event on Thursday and shot a three-under par 69 at the Puerto Rico Open in El Grande, Puerto Rico. Nimmer is retaining his amateur standing so he can finish his senior year competing for Clemson. He is one of three amateurs in the 132-player field this weekend,

Nimmer’s round of 69 included four birdies and just one bogey. He made birdies on the fifth, ninth, 11th and 15th holes. His only bogey came on the 18th hole when he hits his drive in a sand trap and then hit his approach to the green into a greenside bunker. He scored a six on the par five hole.

Nimmer’s 69 tied for the low score by an active Clemson golfer in a PGA Tour event. Last year Doc Redman had a third round 69 at the Heritage in Hilton Head, Island, S.C when he was playing as an amateur and was still a member of the Clemson team.

Nimmer has a good chance to make the cut as he is in a tie for 12th place after the first round. In recording his score on Thursday, he hit 12 of 18 greens and had just 27 putts. He had nine one-putt greens and got up and down from off the green five of six opportunities.

Nimmer was a co-medalist at the Puerto Rico College tournament, also at El Grande, Puerto Rico over this past weekend when he shot a six under par 210 for 54 holes. His victory at that event had nothing to do with his invitational to the PGA Tour event in the same city. He had been extended that invitation a month ago.

“I was happy with how I played,” said Nimmer. “I approached it like a do a college golf tournament. I had four birdies, but I missed some other opportunities early in the round. I always seem to play well in Puerto Rico.” Nimmer’s four birdie putts were from a combined 41 feet.

Nimmer’s victory at the Puerto Rico Classic on Sunday was his third college win of the season. That ties him with D.J. Trahan as the only Clemson golfers to win three times in the same season. Ironically, one of the players Nimmer is tied with after the first round of the Puerto Rico Open PGA event is Trahan, who also shot a three under par 69 on Thursday. 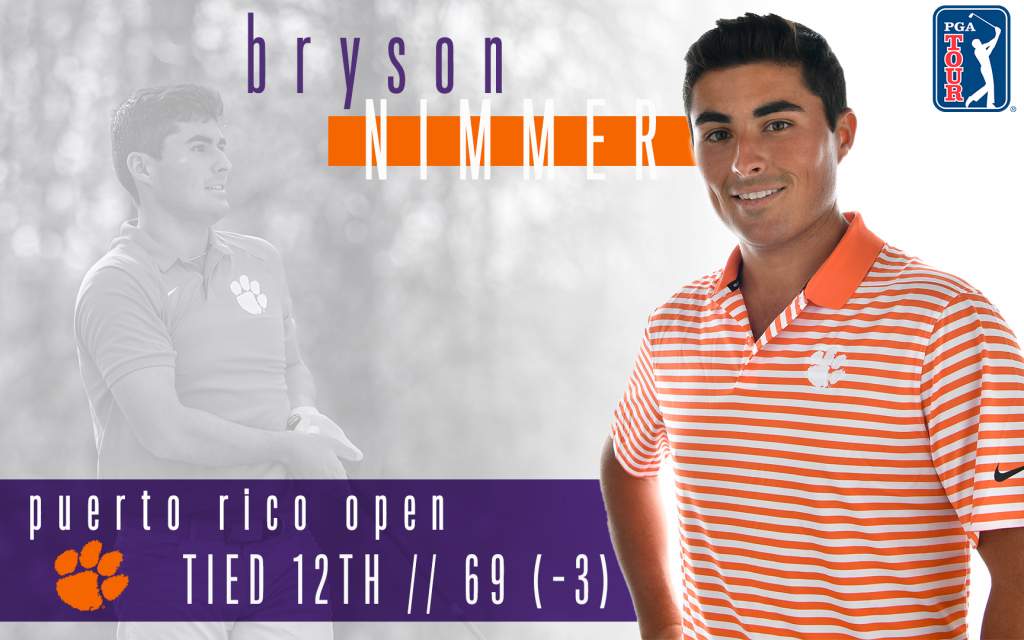