New London, NC—Bryson Nimmer shot a final-round 68 and finished third individually at the ACC Men’s Golf Championship on Saturday at the Old North State Club in New London, NC.    The Clemson team finished seventh in the 12-team field with a score of 860, four-under-par.

Georgia Tech won the tournament with an ACC Championship record 37-under-par score of 827, 15 shots better than Virginia’s 842 total.  The Cavaliers entered the tournament unranked among the top 50 of the Golfstat computer ratings.

Wake Forest, winners of five tournaments this year and ranked third in the nation, finished third with an 845 total.  Florida State and ninth-ranked Duke tied for fourth at 852, while NC State was sixth at 856.  The 19th ranked Tigers finished seventh at 860, and 20th ranked Louisville was eighth at 861.  Virginia Tech was ninth at 864 and 23rd ranked North Carolina was 10th at 869.  Notre Dame was 11th with an 869 score and Boston College was 12th at 875.

Jon Pak of Florida State was the individual champion with a 54-hole score of 203, 13-under-par.   Andy Ogletree of Georgia Tech had a four-shot lead over Pak entering the final round, but the Yellow Jacket star shot a final round 73 to finish second at 204.   Nimmer was third with a 205 total, 11-under par, while David Morgan (206) and Thomas Walsh (207) of Virginia finished fourth and fifth, respectively. Both were keys to the Cavaliers high finish as both were not ranked in the top 100 in the nation entering the tournament.

Nimmer had another outstanding tournament as he continues to record arguably the best individual season in Clemson history.   He posted rounds of 67-70-68 for his 205 score, his ninth under-par tournament in 10 events this year.   The native of Bluffton now has a record 18 rounds in the 60s this year and 22 rounds under-par.  He is 70 under par for his 30 rounds so far this year.

For the season, he has a 68.97 stroke average, on pace for the best in Clemson history and now has a record seven top three finishes.      He finished this tournament with 15 birdies and two eagles.  He now has 499 birdies for his career and when he makes his first birdie in the NCAA regional he will join D.J. Trahan, Lucas Glover and Jonathan Byrd as the only golfers in Clemson history with 500 career birdies.

“I can’t really put my finger on one area of my game that was better than another for the course of the tournament,” said Nimmer after Saturday’s final round.  “One round it might have been putting, another it might have been driving the ball in the fairway, and another it was ball striking.  But, overall  was happy with the way I played this weekend.”

While other Tigers supported Nimmer in the first round when the Tigers had a team round of 275, the last two rounds, no one other than Nimmer shot under par.    Kyle Cottam was Clemson’s second best golfer for the tournament with a 215 score, one-under-par and good enough for 24th place in the field that included 13 of the top 50 golfers in the nation according to Golfstat.   Cottam had an even par 72 on Saturday.   His first round 68 was a big reason Clemson was in second place after the first round.

Jacob Bridgeman shot a 218 for the 54 holes and finished in a tie for 32nd place.   The freshman from Inman, SC had a final round 73.  He finished the tournament with  41 pars, second most in the field.

William Nottingham had an opening round 70, but finished with rounds of 75 and 77 for a 222 total, 46th in the field.   Colby Patton played the first two rounds of the tournament and had rounds of 75 and 76.  Head Coach Larry Penley substituted Zack Gordon for the final round.  The freshman got off to a bad start with a 10 on the par five first hole.  He shot 46 on the front side, then settled down for a 35 on the back, second best among Tiger golfers on Saturday, but he still finished with an 81

Clemson will now await its NCAA regional assignment on Wednesday, May 1.  The announcement will be made at 9 p.m. on Golf Channel.  The regional sites for this year’s NCAA Men’s Tournament are Louisville, Kent., Palo Alto, Calif,   Athens, Ga., Pullman, Wash., Myrtle Beach, S.C. and Austin, Tex.  The regional tournaments will be played May 13-15. 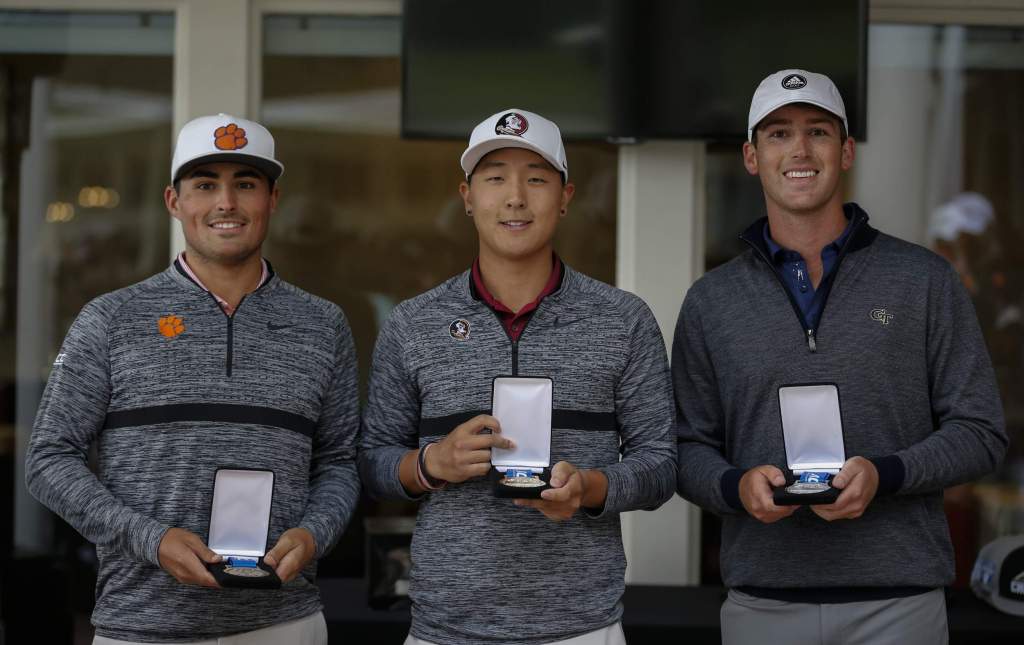