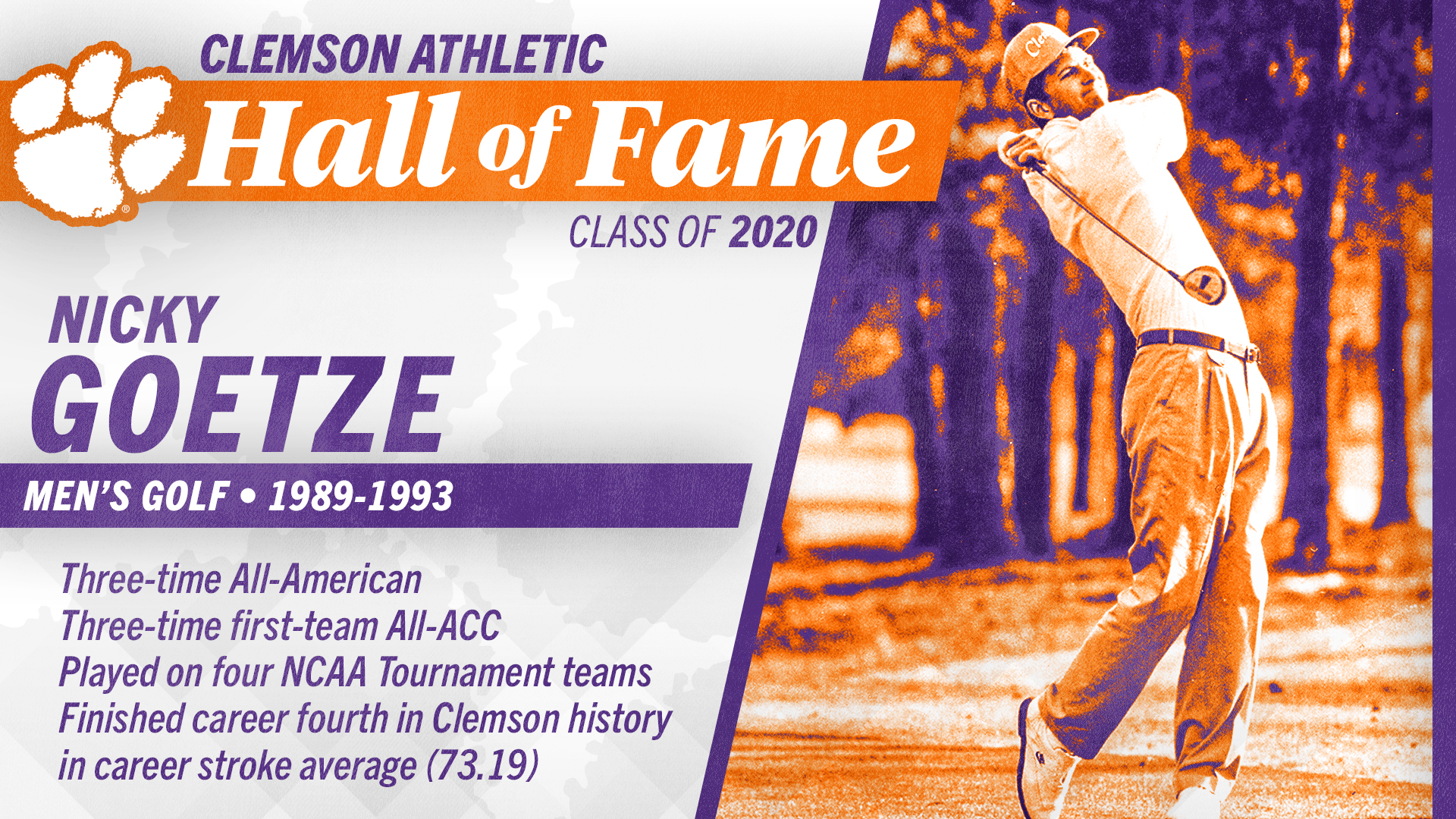 Block C Club is Inducting eight members into the Clemson Hall of Fame. The organization has honored former student-athletes since 1973.

The Clemson athletic department adds eight new members to its hall of fame this weekend as members of the 2020 class. Due to the COVID-19 pandemic, the 2020 class was unable to be recognized, therefore that class is being recognized this season at today’s game.

This is one of the most decorated classes in the history of the Clemson Athletic Hall of Fame, which dates to 1973. The new inductees include one former head coach, one longtime administrator and six former student-athletes. The class also includes five All-Americans, two ACC MVPs and two members of ACC 50-Year Anniversary teams.

The group includes C.J. Spiller and Trevor Booker, who were both in their first year of eligibility for the hall of fame. Spiller finished sixth in the Heisman Trophy voting in 2009, when he was a unanimous All-American and ACC MVP. Spiller was also an All-American in track during his Clemson career.

Former NCAA track champion Travis Padgett, a two-time winner of the school’s Frank Howard Award and ACC men’s track MVP indoors and outdoors in 2008, is one of the 2020 inductees. He still holds the school record in the 100m (9.89).

Julie Augustyniak was named to the ACC 50-Year Anniversary women’s soccer team and joins her twin sister, Nancy, in the hall of fame. Clemson won the ACC regular-season championship and finished a program-best No. 5 in the nation during her senior year (2000).

Cappy Craig was Clemson’s first ACC champion and a two-time All-America diver in 1982. She led the Tigers to their first top-20 NCAA finish that season.

Bill D’Andrea began an over 30-year association with Clemson athletics as a graduate assistant football coach in 1983. He was a trusted member of Danny Ford’s coaching staff from 1986-89, when he helped the Tigers to three ACC championships and four top-20 finishes, then he held important administrative roles as the first leader of Vickery Hall and later as executive director of IPTAY.

Jack Leggett is the only head coach in this class and is also in his first year of eligibility. He led the baseball team for 22 years (1994-15) and took them to 21 NCAA Tourneys. Clemson had a top-10 final ranking seven times, including three when the Tigers reached the Final Four of the College World Series. He took Clemson to Omaha six times overall.

Julie Augustyniak • Soccer 1997-00
• Named to ACC 50-Year Anniversary team.
• Third-team All-American by Soccer Times as a senior in 2000.
• Second-Team All-ACC in 1999.
• Second-team All-Southeast region in 2000.
• All-ACC Tournament team in 2000.
• Started 89 consecutive matches from 1997-00.
• Helped Clemson to a 64-24-2 record during her four years as a starting back.
• Clemson had 21 wins over top-25 teams during her career, including a victory over top-ranked North Carolina in 2000.
• Clemson won the ACC regular-season title in 2000 and finished No. 5 in the nation.
• Clemson finished ranked in the top 11 of the country, including three top-seven finishes, all four years during her career.
• Played professionally with the Atlanta Beat.
• Joins her twin sister, Nancy, in the Clemson Athletic Hall of Fame.

Cappy Craig • Diving 1977-82
• ACC champion in the 1m and 3m events in 1982.
• First Clemson ACC champion in any event in women’s swimming & diving history.
• All-American in the 1m and 3m in 1982, the program’s first All-American.
• Finished fourth in the 1m and seventh in the 3M at the 1982 NCAA event at Florida.
• One of three Tiger divers to earn All-America honors in both events at the same meet.
• The native of Darien, Conn. led Clemson to an 18th-place finish at the first NCAA Women’s Swimming & Diving Championships (1982), Clemson’s first top-20 finish in an NCAA championship in women’s sports history.

Bill D’Andrea • Administrator 1986-2014
• Helped make Clemson one of the top all-around programs in the nation through his work as an assistant football coach, director of student-athlete academic services and as senior associate athletic director supervising the scholarship fundraising instrument (IPTAY).
• As an offensive line coach, he helped the Tigers to three consecutive ACC championships from 1986-88, tying a league record for consecutive league titles at the time.
• In the four years he served as a full-time assistant coach, Clemson had a 38-8-2 record, won four bowl games and finished in the top 20 every year.
• Became the first director of Vickery Hall, Clemson’s student-athlete enrichment facility, in 1991. The program was named one of the top programs of its kind in the nation in 1999.
• Named a senior associate athletic director in 2002, as he oversaw all of Clemson`s fundraising activities (with IPTAY), promotions, marketing, tickets and athletic communications.
• Much of his responsibilities centered around the capital campaign that provided the financial backing of the WestZone project.
• During his tenure organizing Clemson’s fundraising activities, annual donations to IPTAY rose to record levels. A record was also established for the number of donors.

Nicky Goetze • Golf 1989-93
• Three-time All-American, as he was a third-team pick as a sophomore, honorable mention as a junior and second-team selection as a senior.
• Two-time member of the ACC Academic Honor Roll and an Academic All-America scholar by Golf Coaches Association in 1992.
• Played on four NCAA Tournament teams that all ranked in the top 20 in the nation, including the No. 4 team in 1993.
• Won the 1990 and 1992 Ping Preview Tournaments by four shots apiece. Among the players he beat in 1990 was World Golf Hall of Famer Phil Mickelson.
• Fourth in Clemson history in career stroke average (73.2) when he graduated. He played more tournaments (55) and rounds (159) than any other Tiger in history.
• Had 19 career top-10 finishes and 68 rounds at par or better.
• Three-time, First-Team All-ACC selection (1991-93).
• Qualified for the United States Amateur all four seasons he was at Clemson.
• Named to the ACC 50-Year Anniversary team in 2003.

Jack Leggett • Baseball Coach 1992-2015
• Inducted into the ABCA Hall of Fame in 2014.
• Joined Larry Penley (men’s golf) as the only head coaches in school history to be inducted into a national hall of fame while still an active coach.
• Guided the baseball program for 22 years and led the team to 955 wins (43.4 wins per season).
• Led the Tigers to 21 NCAA Tournament appearances in 22 seasons as head coach, including six trips to the College World Series.
• Led the Tigers to top-four finishes at the College World Series in 1996, 2002 and 2010, the only top-four finishes in program history.
• Clemson was the seventh-winningest program in the nation during his 22 years at the helm. His six trips to Omaha tied for ninth-most in the nation during that time.
• Of his 955 wins, 244 (26 percent) were against top-25 ranked teams. He also had 135 victories over top-10 teams.
• Led Clemson to a top-20 finish 13 times and top-10 finish seven times. The Tigers were ranked No. 1 in the nation 20 times during his tenure.
• ACC Coach-of-the-Year in 1994, 1995 and 2006.
• Had 68 wins in NCAA Tournament games.
• Had a winning record in ACC play in 21 of his 22 seasons

Travis Padgett • Track & Field 2006-08
• NCAA champion in the 60m indoors (2007).
• Tied for seventh in program history with six career All-America honors.
• Placed second, third and fourth during his career in the 100m at the NCAA Outdoor Championships.
• Produced a career-best time and program record in the 100m (9.89) while representing Clemson at the 2008 USA Championships.
• Third in Clemson history in the 60m indoors (6.56).
• Qualified for the 2008 U.S. Olympic Team as a member of the 4x100m relay squad.
• Won five ACC championships in sprints (including all three in the 100m) during his career.
• ACC most valuable performer indoor and outdoor in 2008.
• ACC Outdoor Track Freshman-of-the-Year in 2006.
• Back-to-back winner (2007,08) of the Tiger department-wide Frank Howard Award (bringing honor to Clemson).

C.J. Spiller • Football, Track & Field 2006-10
• Sixth in the Heisman Trophy voting in 2009.
• Unanimous first-team All-American as a senior in 2009.
• ACC Player-of-the-Year in 2009.
• First-team All-American as a kick returner and second-team All-American as a running back. He became the first player in history to be named at two positions in one year by Walter Camp.
• Set an NCAA record for career returns for touchdowns with eight (seven kickoff returns and one punt return).
• In 2009, he became the first ACC player in history with 1,000 rushing yards and 500 receiving yards in one season.
• Had 21 career touchdowns of 50+ yards, 12 more than any other Tiger.
• First-team Academic All-ACC and First Team All-ACC on the field in 2008.
• ACC’s career leader in all-purpose yards (7,588), 694 yards more than any other ACC player.
• All-American in track for the 2008-09 academic year. He was a part of the 4x100m relay team that finished third in the nation outdoors.
• All-American indoors in 2008, as he had a time of 6.58 in the 60m.
• No. 9 overall pick of the 2010 NFL draft by the Buffalo Bills. He played eight years in the NFL.
• Earned his degree from Clemson in December 2009.
• In his first year as an assistant coach (running backs) on the football staff.