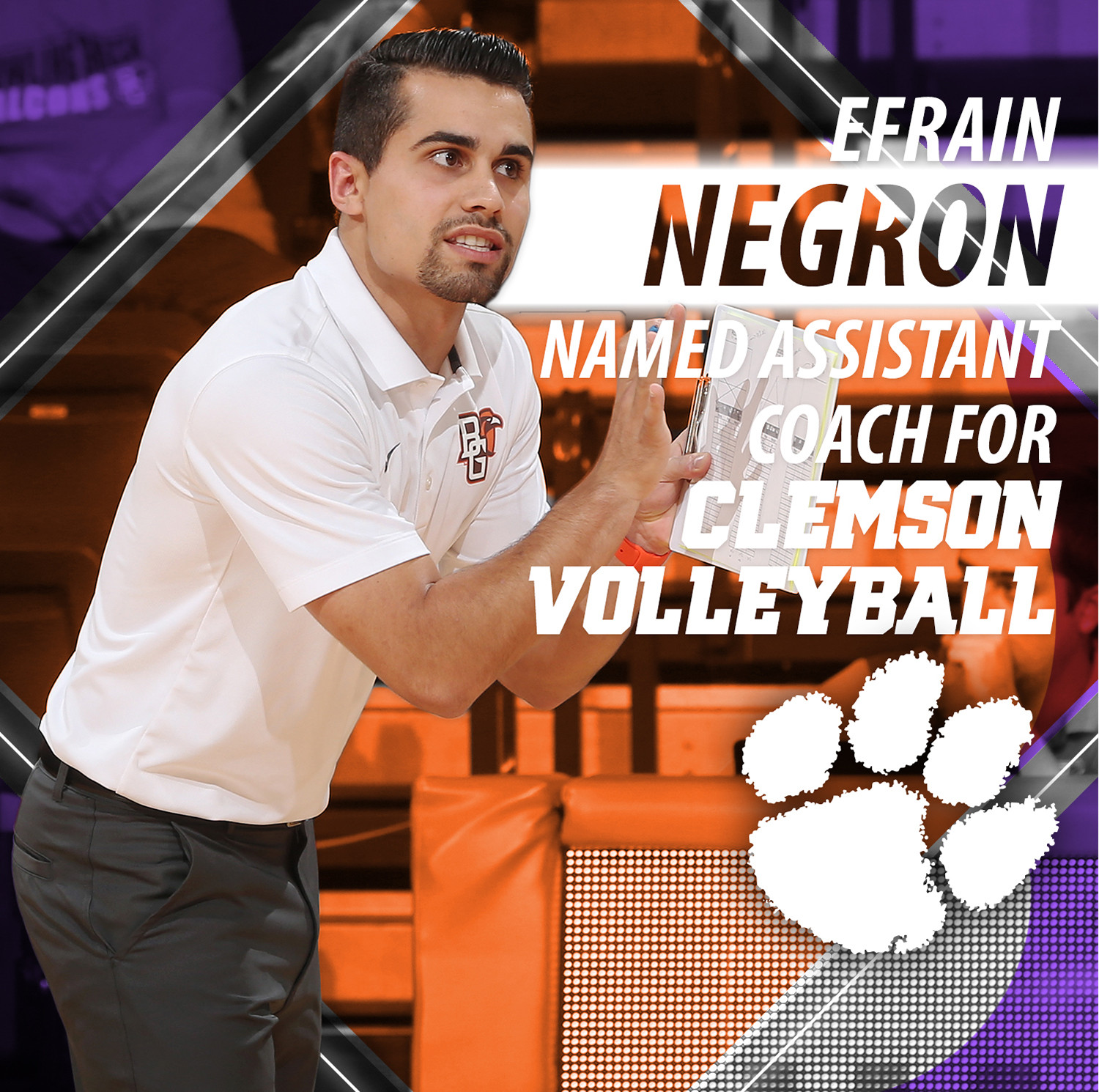 “I met Efrain during a recruiting trip to Puerto Rico and he stuck out to me because of his dynamic and contagious personality. It doesn’t take long to recognize his passion for excellence, his ambition, and relentless work ethic,” said Franklin.

“Efrain had a successful playing career as a libero and has deep knowledge for the defensive side of the game. He will be our defensive coordinator and work closely with our back row players. His experience with Data Volley and VolleyMetrics will also be extremely important for the success of our program. I look forward to working with Efrain and having him join the Clemson family.”

At Bowling Green State in 2016, Negron assisted in all aspects of the program, including recruiting, practice planning and game preparation. He coordinated BGSU’s scouting and film exchange, and was also responsible for the individual development and training of the team’s liberos and defensive specialists, as well as team defense and serve receive. The Falcons led the MAC in team digs per set in 2016, with a 17.67 average, a figure that ranked ninth in the nation in digs per set. He coached Madeline Garda, the national leader in digs per set (6.66) to MAC Defensive Player of the Year and First-Team All-Conference honors.

At Appalachian State in 2015, Negron helped the Mountaineers to a 22-8 record (13-3 Sun Belt) and a runner-up finish at the Sun Belt Championship tournament. Negron trained the Appalachian State liberos and defensive specialists, and was responsible for team defense and serve receive. The Mountaineers led the conference in digs per set that season, with a 16.58 average.

“I am beyond excited and thankful to be a part of the Clemson family,” said Negron. “I would like thank Michaela Franklin, Stephanie Ellison and Dan Radakovich for this amazing opportunity to join such a prestigious university. I would also like to thank the other staff members with whom I spoke to during the interviewing process. I can’t wait to get to campus and get started. I look forward to contributing to the vision that Michaela has for Clemson volleyball and am thrilled to make a positive impact in the program.”

Negron was a four-year starter at libero for Lees-McRae College in Banner Elk, N.C. from 2010-13, where he was a three-time All-Conference Carolinas selection. He set the Lees-McRae school record in digs, digs per set and reception percentage, and sits in the top five statistically in the NCAA for career digs. He represented USA Men’s Volleyball as a libero at the Asian Pacific Volleyball Cup in Japan during the summer of 2012. Negron graduated from Lees-McRae with a degree in Sports Science in May of 2014.