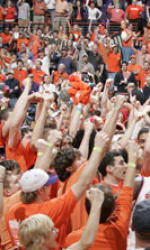 ATLANTA, GA – For college hoops fans everywhere, it’s beginning to feel a lot like NCAA® March Madness®. With the passion of college basketball pulsating through campuses nationwide, Coca-Cola is challenging fans everywhere to share their stories of devotion to their beloved teams and schools and their favorite NCAA March Madness moments.

People can take their shot at being chosen as one of college basketball’s Most Devoted Fans by visiting www.ncaasports.com/cokemostdevoted and submitting a short video and photo that showcase their allegiance to their favorite school. The college hoops crazies who best demonstrate the loyalty, love and excitement that personify NCAA March Madness and the teams who compete have a chance to win a spot in the “Coca-Cola Human Bracket” and a trip to the 2007 NCAA Men’s Final Four in Atlanta, Ga.

“The dedication and passion that NCAA basketball fans have for their favorite teams, especially during March Madness, is one of the most unique connections in sports,” said Katie Bayne, senior vice president, Coca-Cola Brands, Coca-Cola North America. “The Coca-Cola Human Bracket program is a larger than life way to celebrate the devotion that these special fans have to their schools and to enjoying a Coca-Cola while watching college hoops.”

Prior to the start of the 2007 NCAA Men’s Basketball Tournament, the best entrant representing each NCAA Division-I school will be selected for a chance to be included in the “Coca-Cola Human Bracket.” On Selection Sunday, as basketball fans across the country learn which teams secure spots in the field of 65 for NCAA March Madness 2007, the “Coca-Cola Human Bracket” will be filled out with oversized photos of each teams’ representative fan, replete in their school colors.

The giant “Coca-Cola Human Bracket”, which is the official Division I Men’s Basketball NCAA Championship Bracket in the NCAA Final Four Host city, will be prominently displayed on a building in downtown Atlanta and become a centerpiece of NCAA March Madness. During the Tournament, fan photos representing the participating schools will advance through the bracket with each corresponding team victory. Ultimately, the four fans associated with the schools who reach college basketball’s pinnacle will win trips for two to the 2007 NCAA Final Four.

“Through this one-of-a kind program, Coca-Cola is shining the spotlight on NCAA® Basketball fans and recognizing them for the excitement they bring to the sport,” said Greg Shaheen, NCAA Senior Vice President for Basketball and Business Strategies. “Their enthusiasm and steadfast dedication is what electrifies the game and makes the Tournament so memorable and special.”

In the true spirit of the NCAA Championship Tournament, Coca-Cola also will award one “at-large” bid to one lucky fan whose entry best demonstrates unparalleled devotion to their favorite school. Even if their team doesn’t make it to the big dance, the “at-large” fan will win a trip for two to the 2007 Final Four® and join the other fans representing the Final Four teams in Atlanta.

Entries for the Most Devoted Fan promotion will be accepted until midnight on January 26, 2007. Videos and photos showing off the creativity and unmatchable devotion of college basketball’s greatest fans should be sent to Coca-Cola Most Devoted Hoops Fans, 8000 Norman Center Drive, Suite 400, Minneapolis, MN 55437. For official rules and more information, fans can visit www.ncaasports.com/cokemostdevoted. Coca-Cola is an Official NCAA Corporate Champion. NCAA, March Madness and Final Four are licensed by or trademarks of the National Collegiate Athletic Association.