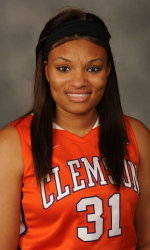 “It’s an exciting honor for Natiece to be recognized in the preseason by the league’s staff and media,” said Coleman, who starts her second season as Clemson’s Head Coach. “My expectation is that she comes out and contributes early. She is very versatile on offense, and really gets after it on defense, and I expect her to keep it up throughout the year. I tell all the freshmen, that `you’re a freshman, but you are going to have to grow up in a hurry.'”

The Lady Tigers were also picked to finish 11th by the ACC Media and coaches at the ACC’s annual Media Day, held at the Greensboro Coliseum. The Tigers were 10-20 last season, and held a 3-11 mark in league play. Miami, last season’s co-champions, were picked first with 30 of 40 first-place votes.

“We’re picked number-11, which means we have a lot to prove,” said Coleman. “We can use it as motivation. We obviously have a lot of work to do and a lot to prove to ourselves and to our competition.”

The ACC Newcomer Watch list, which replaced the Preseason Rookie of the Year honor in 2010, highlights freshmen, true and redshirt, and transfers that are expected to make an immediate impact in the league.

The Lady Tigers will participate in the Rock the John event on Oct. 21, and open the season against Davidson on Nov. 11.