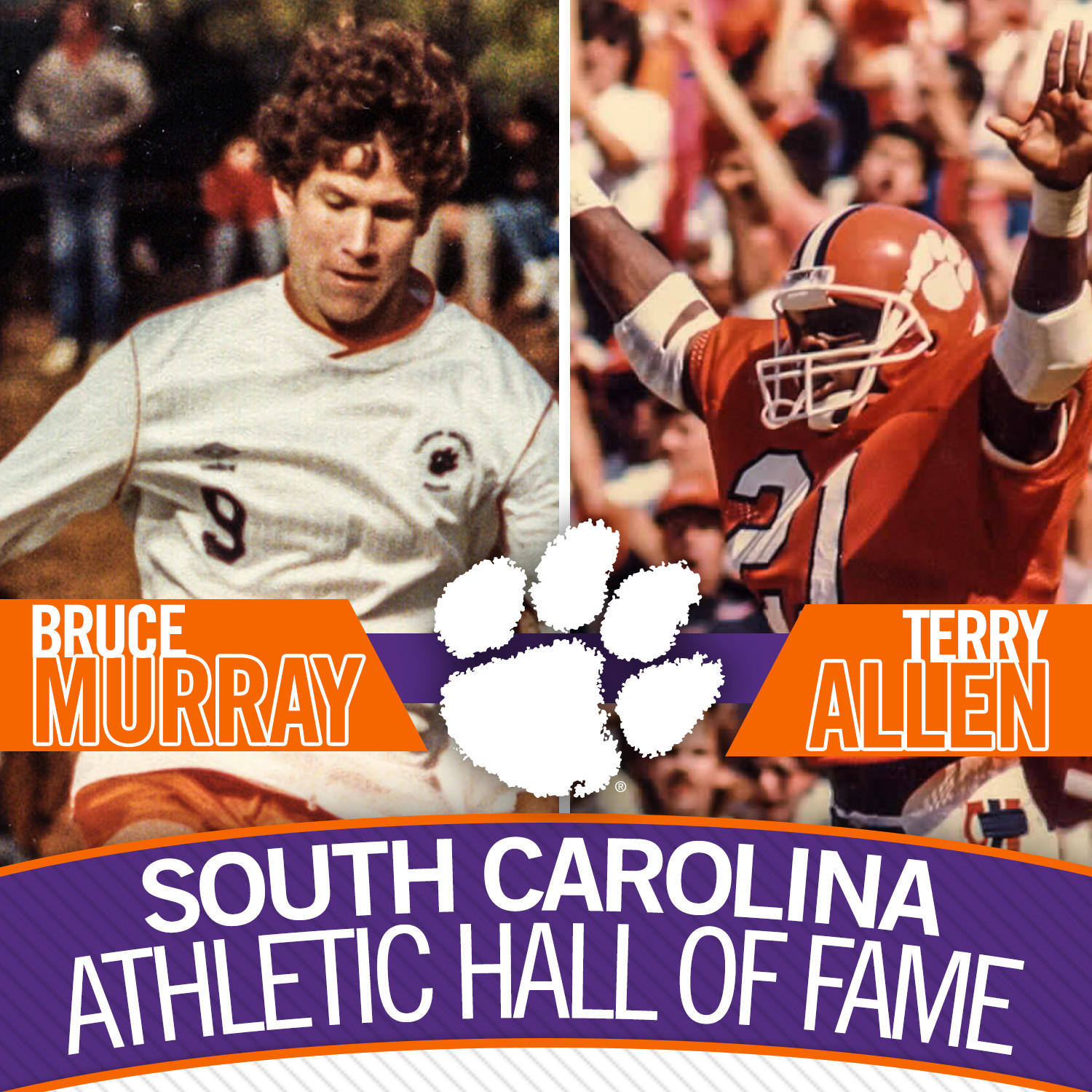 COLUMBIA, S.C.— Terry Allen, a former Clemson and NFL great, and Bruce Murray who led the Tigers to the 1984 and 1987 NCAA Soccer National Championships and played on the U.S. National Soccer Team, highlight the South Carolina Athletic Hall of Fame’s Class of 2015.

The seven individuals will be enshrined with the state’s highest athletic honor on May 11 at the Columbia Metropolitan Convention Center. Tickets (table of eight for $500) and program sponsorships may be purchased by calling the SCAHOF office at 803/779-0905. The affair, which includes a reception and dinner, begins at 5:30 p.m.

In addition to the inductees donning of the symbolic blue jackets, the Bobby Richardson Sportsmanship Award recipient will also be recognized. The event, which includes a host of returning past inductees, is the largest annual celebration of Palmetto State sports stars under one roof. Legendary South Carolina State coach and 2008 SCAHOF President Willie Jeffries, known for his witticism, will again preside over the banquet as master of ceremonies along with Executive Director Ephraim Ulmer and this year’s president, Xavier Starkes of Columbia.

TERRY ALLEN: Terry Allen was noted for his toughness, perhaps the most resilient runner in Clemson history. He was Clemson’s top rusher in 1987 and 1988, and only a knee injury prohibited him from leading the team in 1989. Allen rushed for 2,778 yards and 28 TDs across three seasons and was a member of two ACC championship squads (1987 and 1988).

After redshirting the 1986 season, Allen burst on the scene in 1987, leading the ACC in rushing and setting a Clemson freshman record (973 yards). A key victory for the Tigers that year took place against Georgia, a 21-20 verdict. Allen’s straight-ahead run was pivotal on Clemson’s winning field goal drive.  In 1988 as a sophomore, he again led the team in rushing (1,192), and the year was climaxed with his selection as the offensive MVP of the Citrus Bowl victory over Oklahoma. Allen’s junior year was a constant battle against injury. He geared up for one last stand against South Carolina, and he responded with 89 yards in the first half, leading Clemson to a convincing lead. After that season, Allen decided to turn pro. Drafted in the 10th round by the Minnesota Vikings. He was injured during 1990, but the Vikings stayed with him. In his 10 year NFL career, he has had five 1000-yard seasons while averaging 4.0 yards per carry and recording 79 touchdowns.

He played with Minnesota, Washington, New England, New Orleans and Baltimore Ravens, and was named to the Pro Bowl in 1996.  He is the only running back in NFL history to come back from torn ACL injuries on both knees.

BRUCE MURRAY: A 2011 inductee of the U.S. National Soccer Hall of Fame, Murray played for the U.S. National Team and when he retired, he was the United States’ all-time leading scorer. A member of the 1988 U.S Olympic team, he won the Hermann Trophy as the top men’s soccer player in the country in 1987. Murray led Clemson to two NCAA Championships (‘84 & ‘87) and was a key member of both teams.

A two-time All-American, he recorded the winning goal in three NCAA Tournament games (in ‘87 on the way to the National Championship). He was named first team All-ACC in ‘85 and ‘87, and was the first Clemson player in history in the 40-40 club (40+ goals and 40+ assists in a career). Murray ranks sixth in school history in total points (142), seventh in total goals (48), and is second in school history with 46 career assists. In his 84 career games, Murray had either a goal or an assist in 56 games. He is also a member of the ACC 50 Year Anniversary Team and was named one of the top 50 male athletes in ACC history in 2003, the 50th year of the ACC. He is a member of the Clemson Athletic Hall of Fame.