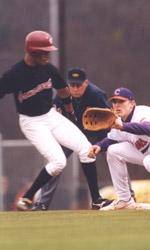 COLUMBIA, S.C. (AP) – South Carolina and Clemson teams have played hundreds of times over the years. Most of the time, the only thing at stake is whose fans get to boast until the next meeting.

But a Tiger win Wednesday night in Omaha, Neb., means Clemson goes to the championship game of the College World Series. The Gamecocks also have a shot at the title game, but will need to beat their archrivals Wednesday and again on Friday to get there.

Either way a Palmetto State team will be in the finals.

“The governor will probably have to come out and shut everything down tomorrow afternoon,” Gamecocks coach Ray Tanner said. “It’s a tremendous statement for the state of South Carolina that we’re guaranteed that one of our teams will play in the national championship game.”

Both teams went to the College World Series in 1977, but didn’t play each other. South Carolina had the best finish that year — runner-up to Arizona State. The Gamecocks got to the championship game in 1975, but came up short against Texas.

But they’ve never met with so much on the line.

“It’s going to be tough to beat them twice here, and this is a real good atmosphere. I think the fans will get into it,” said South Carolina pitcher Aaron Rawl, who pitched a complete game against Georgia Tech on Tuesday. “It’s going to be a pretty good environment here tomorrow and if we beat them tomorrow, I think we’ll have a really good chance of beating them a second time.”

The South Carolina-Clemson rivalry is long — the two schools have played football against each other 99 times — and storied — a state holiday used to be declared when the two teams played football on Big Thursday during the state fair. Clemson leads the football battle 59-36-4.

“If you live in South Carolina you know when South Carolina and Clemson match up, even if it’s equestrian horse racing, there’s going to be a lot on the line,” Gamecocks designated hitter Trey Dyson said. “Everybody knows about the two schools. It’s just crazy.”

The rivalry is bitter, but a couple of Clemson fans said Tuesday they could pull for the Gamecocks if South Carolina ends up playing for the title.

“They’ve got to play through us to get to the finals,” Clemson graduate Jim Prater said. “They beat us twice, I might think about pulling for them.”

John Jacks and his wife, Sandi, will likely be watching Wednesday night’s game. But they won’t be watching the same television.

Sandi is a Clemson fan, while John pulls for the Gamecocks.

Sandi Jacks said Clemson got a break by facing the Gamecocks. “I don’t think Carolina can beat them two games. Georgia Tech had a better chance of beating Clemson,” she said.

John Jacks, who is considering driving to Omaha if South Carolina gets to Saturday’s championship game, thinks the matchup means everyone in the state comes out a winner.

“I think it’s great for the state,” he said. “Half the teams still in the college world series are from South Carolina. I think that’s wonderful from a fan base and a recruiting standpoint.”