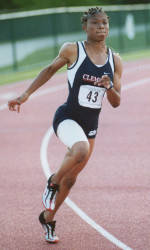 Former Clemson sprinter Cydonie Mothersill qualified for the 200m final at the World Track & Field Championships from Osaka, Japan. The Cayman Islands native posted a time of 22.78 in the first semifinal Thursday, which was good enough for a third-place finish in that heat and will place her as one of eight for Friday’s final.

Mothersill has been incredibly consistent in the 200m at the World Championships. She posted a time of 22.86 in the fourth preliminary on Wednesday to advance to the quarterfinal round. There, she ran a 22.82 and was third in her race, thus sending her to today’s semifinal.

Mothersill has competed in the 200m final twice at the World Championships, most recently two years ago in Helsinki, Finland. She was eighth that year and placed fourth in 2001 when the championships were held in Edmonton, Canada.

Former Lady Tiger pole vaulter Joana Costa also competed this week in Osaka. She cleared a height of 13’3.5″ (4.05m) in the qualification round while representing her home country of Brazil.