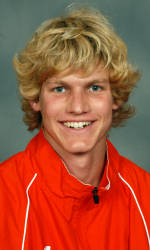 Winston-Salem, NC – Clemson sophomore Miller Moss is second in the decathlon standings after day one at the Deacon Combined Events Meet on the campus of Wake Forest University. Moss compiled 3,956 points on Tuesday and established personal bests in both the 100m dash and long jump.

Moss started out on a strong note, posting his first-ever sub-11 second time in the 100m dash. The Sumter, SC product ran a 10.98 with a slight tailwind, third-best in the field of 13 multi-event athletes. He then moved on the long jump, where he collected a personal best and best jump of all the competitors at 23’3.5″.

He was solid in the final three events Tuesday. He recorded a mark of 41’11.25″ in the shot put, third-best among the participants. Moss then cleared 6’1.25″ in the high jump, before ending the day strong with a time of 47.78 in the quarter mile.

Moss is second behind only unattached athlete Joe Detmer, a former NCAA runner-up in the decathlon for the University of Wisconsin. Detmer tallied 3,964 points Tuesday. Brent LaRue and Tyler Dodds, from host Wake Forest, were third and fourth, respectively, after the first day.