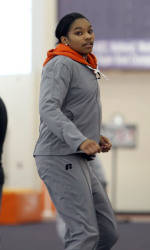 Clemson, SC – Miller Moss finished runner-up in the heptathlon Saturday at the JRF Multi-Event Challenge with an NCAA provisional qualifying total of 5,459 points. Mike Ayers of Tennessee won the seven-event competition with 5,590. The event is named the JRF Multi-Challenge in honor of former Clemson assistant coach Jarrett Ryan Foster, who passed away in July of 2006.

Moss’ total is the third-best in Clemson history, as he surpassed former Tiger great Brent Hobbs on the school’s all-time heptathlon list.

The other major highlight Saturday for the Clemson track & field teams was the performance of April Sinkler in the high jump. Already tied for the school record in the event coming into today, the sophomore star grabbed hold of the record by herself for the moment with a 5’10.75″ clearance. The mark is an improvement of her previous NCAA provisional qualifying effort. She held off teammate Anastasia Wilson, who cleared 5’8.75″.

Kristine Scott captured the 300m dash for the women’s team. She posted a time of 39.91. In the men’s 300m, Trenton Guy jumped out to a commanding lead and cruised to the victory with a time of 35.32 seconds.

In the 1000m run, Jasen Turnbull won the men’s race with a time of 2:31.46. Chris Slate (2:31.72) finished right on his heels in second place. Joanie Castagno led the women’s contingent with a runner-up finish. The sophomore posted a time of 2:59.04, second-best in Clemson history.

Will Noble knocked several seconds off his personal best in the mile run and won the race with a time of 4:09.31. In the women’s mile, Lilla Fördós placed second after putting a time together of 5:11.35, her best effort of the season. Abby Iselborn won the 3000m run, crossing the finish line in 10:27. Sunday Ford (10:34.62) was second.

Clemson used Saturday as practice for different members of the 4x400m relay. The men’s team of Candace Sapp, and Christina Mason, recorded a time of 4:04.73.

George Fields was third in the high jump with a clearance of 6’2.5″. Scott Pauga, a javelin specialist, also cleared 6’2.5″ but finished fourth due to more attempts.

Alex Padgett won the men’s shot put competition handily, as the sophomore recorded a throw of 52’6.5″. The mark was a slight improvement over his personal best in the event. John Oberg was runner-up in the pole vault with a clearance of 15’7″.

The men’s and women’s teams return to action next weekend to compete in the Virginia Tech Elite Meet in Blacksburg, VA, and the McCravy Memorial in Lexington, KY.