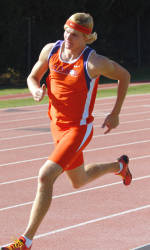 Moss Leads Tigers After Day One at JRF Multi-Event Challenge

Clemson, SC – Miller Moss leads the heptathlon after one day of competition at the JRF Multi-Event Challenge. The red-shirt freshman from Sumter, SC has a total of 2,929 points heading into day two. The final three events of the heptathlon will be held Saturday.

Moss got off to an outstanding start, turning in the top time of the 60m dash in 7.11 seconds. It was a personal best for the freshman, and earned him 844 points toward his total score on day one. Webb and O’Rourke both recorded a time of 7.34, while Feathers (7.55) was eighth-best in the event.

Webb used the high jump to his advantage late in the afternoon. The Oklahoma native and former All-State performer in the event cleared 6’4.25″, best among the 12 multi-event athletes. Moss came through in the clutch on the high jump as well, as he cleared two heights on his final attempt. He then easily went over 6’2″ on his first try.

The student-athletes return to action Saturday for the conclusion of the heptathlon. The 60m hurdles will be held at 11:00 AM, with the pole vault slated for 12:00 noon. The final event of the afternoon will be the 1000m run.