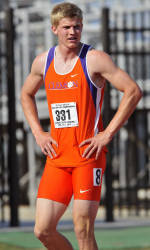 EUGENE, OR – Clemson had a pair of men’s track & field student-athletes in action Friday at the NCAA Championships at Historic Hayward Field, home of the Oregon Ducks. It was a tough day for both Zach Berg and Miller Moss, whose seasons came to a disappointing end Friday in front of a capacity crowd.

Moss was having an outstanding competition the decathlon and actually was in third place through six of the 10 events, but he ran into trouble in the discus throw. After fouling on the first two attempts, the pressure was on to record a legal mark with his final attempt. He appeared to have a solid effort on his third throw, but officials ruled he committed a toe foul in the throwing circle before his implement landed. As a result, the zero points in the event took him out of the competition altogether and dropped him 18 positions in the order. The ruling was appealed, but it was upheld in the end.

Berg fouled all three of his preliminary round attempts and did not advance to the finals of the hammer throw. Still, the graduate student finished his career as a four-time All-ACC performer and school record-holder in two events, despite multiple back injuries over the last five years.

The Tigers will compete in a pair of women’s events on Saturday, the final day of competition. April Sinkler will compete in the long jump at 12:30 PM. The women’s 4x100m relay team will attempt to win an NCAA crown at 1:03 PM. CBS will televise the meet live from 1-3 PM on the East Coast.