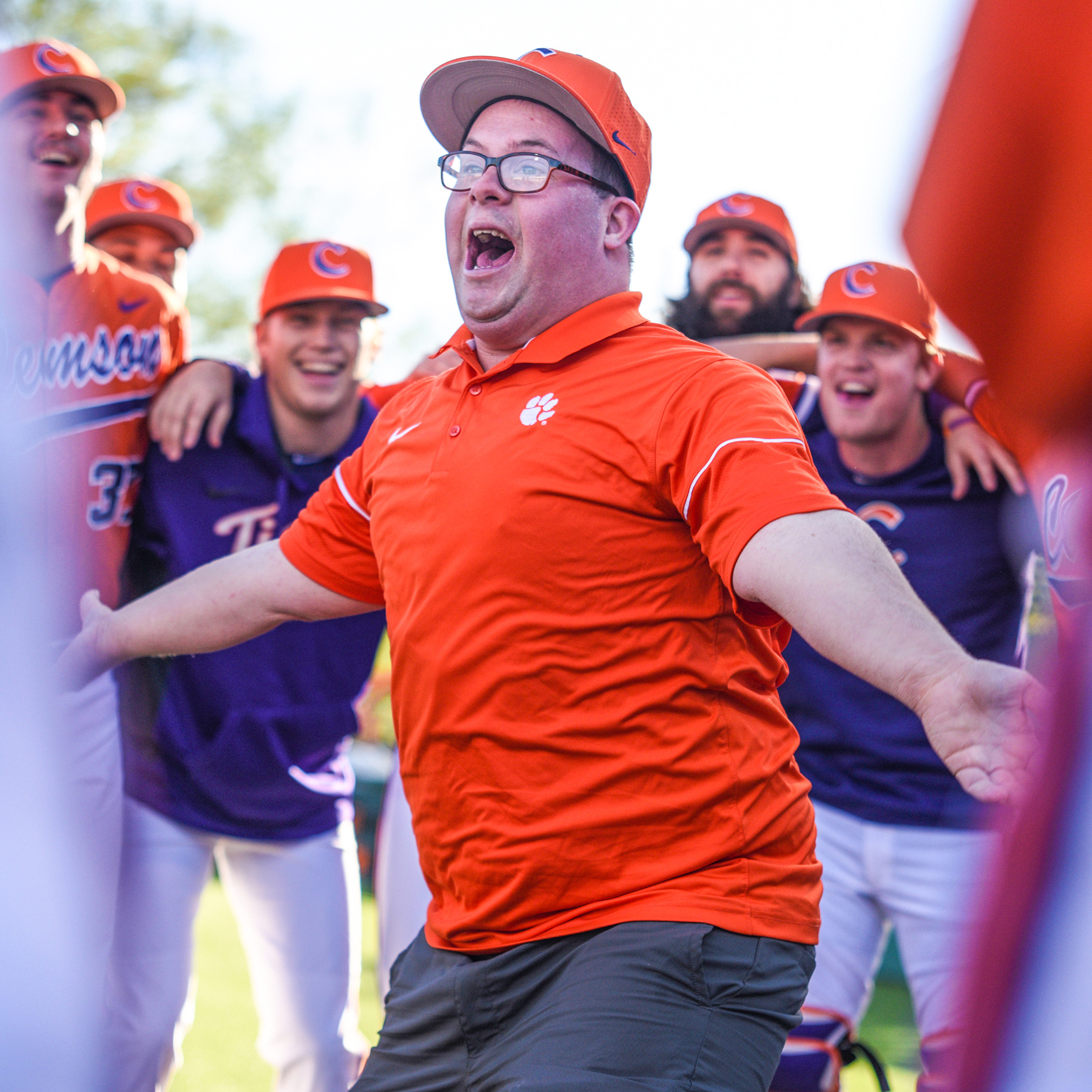 More Than an Equipment Manager

You don’t often see equipment managers in the middle of a pregame huddle getting a team hyped before they take the field, but that’s exactly where Tiger baseball manager Zach Buchanan is most in his element, according to first baseman Andrew Cox.

“When we huddle around him before the game starts, he’s in his element there,” said the graduate student and team leader. “He has infused some looseness, energy and fun into our program, and whether he knows it or not, he’s been a big help with what we’ve been able to do so far. He always has a smile on his face, and everyone is always excited to see him. We all love him and love having him around.”

Buchanan, now in his second season with the team, does not only provide energy and positivity for the team, but also an important sense of perspective. He has Down syndrome, an intellectual disability that required him to overcome significant obstacles when he was younger.

“Growing up, he was challenged in developing physically and getting stronger,” explained his parents, Mary and Carl. “He had low muscle tone and he’s been in physical therapy since he was 60 days old, so that’s why he’s strong as a bull right now.

“He was in speech therapy, occupational therapy and physical therapy as a baby. He had to learn how to eat and had to learn how to write, walk and manipulate things like buttons, zippers, doorknobs…things we take for granted. We tried to set realistic goals that were more applicable to life, because by the time he got to middle school, he wanted to work. We based all of his goals around being able to get a job and being independent.”

When Buchanan graduated from high school, he attended a postgraduate program in Gwinnett County in Georgia that allowed people with similar disabilities to work various retail, community and industrial jobs. Once he aged out of that program with a “rich work history and resume,” according to his father, at 22, the Atlanta-native Buchanans began looking for other educational opportunities.

They stumbled upon ClemsonLIFE, a program at Clemson for students with intellectual disabilities who desire a postsecondary experience on a college campus and whose mission “is to provide a coordinated course of study that includes career exploration and preparation along with self-awareness, discovery and personal improvement through a framework of courses, job internships and community participation.”

Buchanan interviewed and was one of seven students accepted for the fall of 2014 to what was then a two-year program. Since then, however, ClemsonLIFE has expanded to include invitation-based advanced placement third and fourth years, and he has taken full advantage of that chance. He is now in his junior year of the program and will graduate in May 2018 in both the ClemsonLIFE and regular university ceremonies.

“He has gone from being dependent and living in a supervised environment to independently living in an unsupervised environment,” said his parents of the growth he has experienced during his time at Clemson. “He goes to class in the mornings, and he has to grab transportation to get there and to work in the afternoons and weekends. He is independently living, paying his own bills and making his own money to pay the rent and utilities. He does his own laundry, his own shopping, his own online banking…they have cooking classes at night…he’s done extremely well.”

And, of course, he gets to spend his free time at Doug Kingsmore Stadium, a place where he feels right at home.

“He started playing basketball, softball and swimming when he was four, so that helped him athletically, physically and mentally, and it enhanced his confidence. He’s very comfortable in most any athletic field, but especially baseball.”

Though Buchanan does not play anymore, his pregame hype huddles, a duty that he takes very seriously, are the perfect outlet for him to get involved with the game, and the experience is mutually beneficial for both Buchanan and the team.

“He feels very responsible for them to win,” his mom stated. “He really feels like he is an asset. And those young men probably don’t realize it, but Zach is so observant and aware, and they give him a great example of mature behavior and appropriateness, and we’ve expressed that we want the coaches to feel comfortable in guiding Zach in acting appropriately, and also to educate the team.

“Everybody is different…everybody has a few quirks, but the bottom line is that the young men that play baseball will benefit, and Zach will benefit. That’s the whole purpose of him being there…to benefit from the game of baseball and the examples that will help him to be so much more mature to handle life and everyday stuff.”

The players agree with his mom’s assessment of having him around, adding that his relentless optimism serves as an example for them, both on and off the field.

“Zach puts things in perspective for us,” reflected Cox. “When we think we might be having a bad day, whether it be school or we didn’t perform the way we wanted to perform on the field, or whatever the case may be, we get to be at the field every day playing a game that we love, and we’re fortunate enough to be able to play.

“And then there’s Zach, who never has a bad day. He always has a smile on his face, and he’s always energetic and positive and supporting us. Having him around has been just as much of a gift for us as it has been for him.”

For Buchanan, being able to be such a big part of the team is like a dream, and he loves the players just as much as they love him. He has especially bonded with former catcher Chris Okey, center fielder Chase Pinder and Cox, who maintains that Buchanan is one of his best friends on the team and that his infectious attitude makes him want to impact people in a similar way that the equipment manager is able to, and it all goes back to those pregame huddles.

“When he’s getting them hyped up, he really gets into that,” said his father. “He really enjoys it, and you can see it on the guys’ faces, too…they’re all laughing. Regular fans should know that he’s very comfortable with what he’s doing, and he really enjoys it because he’s been doing it all his life, being part of a baseball family.

“He really enjoys being on the team with those guys, and he appreciates the way they treat him just like another player. Like he said last spring, ‘I love them, and they love me.’ That’s pretty appropriate because he knows they care a lot about him, and he cares likewise.”

The Buchanans are not exactly sure what the future holds for their son, but for now, you can usually find him enjoying being in his element with the baseball team and making sure he does his part to ensure a win…