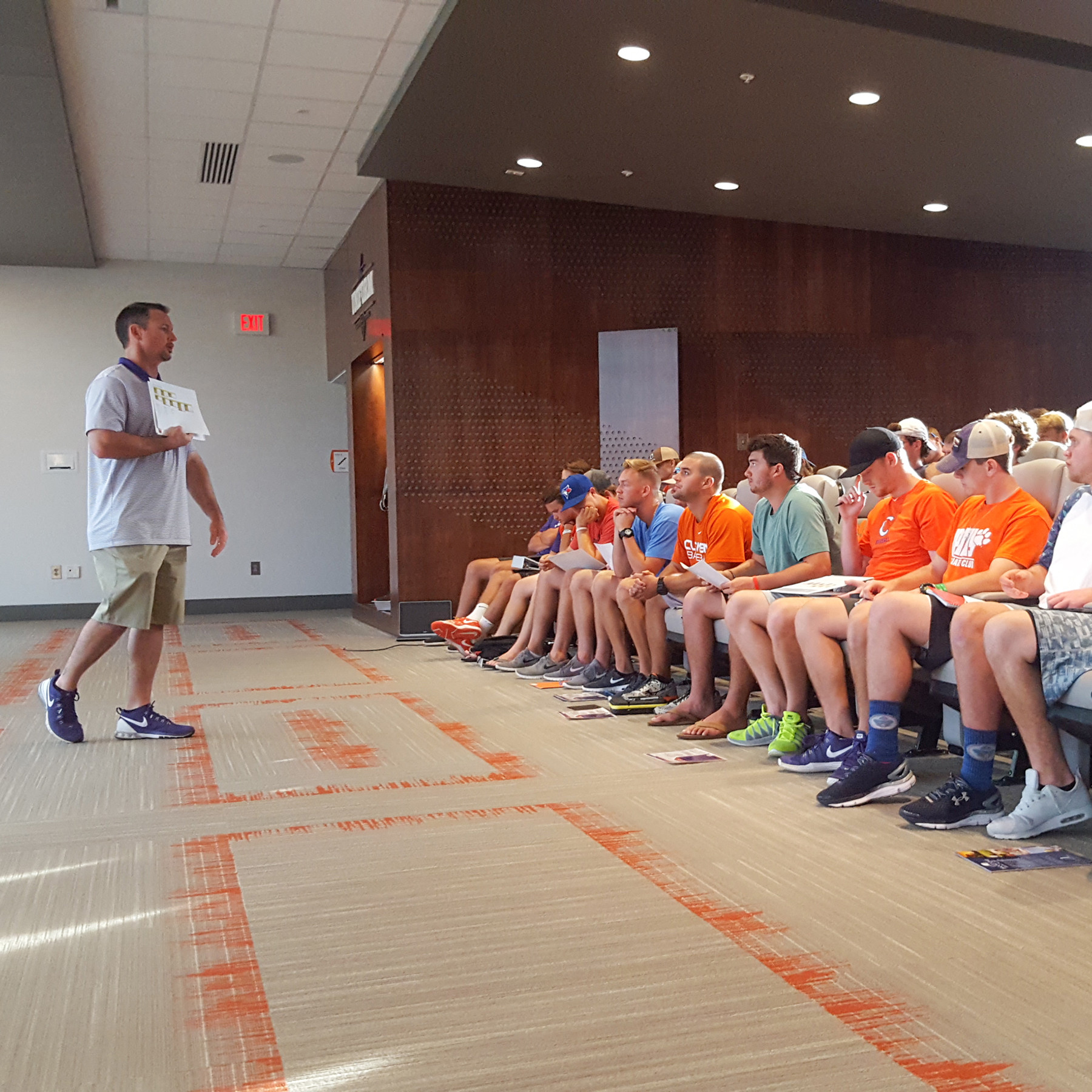 Opening day is six months away for head coach Monte Lee and the 2017 Tigers, but work started Wednesday night.

The team held its annual first meeting inside the Doug Kingsmore Stadium player facility on the first day of classes, and it served as a time for players to hear from various academic and athletic resources that are available to them throughout their time at Clemson. Speakers included academic and career advisors, an IPTAY representative, compliance officers and director of athletics Dan Radakovich.

The meeting also served as the occasion for Lee to address the team as a group for the first time, and he set the tone for practice and preparation for the season during his hour-long talk. Off the field, he emphasized players having a “get to” attitude as opposed to a “have to” approach towards everything, from strength training to classes. He wants his players to “get one percent better every day” and focus on the process over the outcome.

“I expect your best in everything that we do,” Lee told his players. “You will embrace the team concept with total commitment.”

That team concept is obviously manifested on the field, and Lee discussed how this year’s squad can learn from the foundation that was established in his first year as head coach, especially when it comes to dealing with pressure, as the 2016 squad battled to 24 come-from-behind wins.

At the same time, he also acknowledged that this team is completely different from last year’s, and that new players must step up and become leaders. He noted that when a team’s best players are also the leaders is when championships are won, and that leadership is developed when the team polices itself.

The Tigers will turn to a new crop of players as leaders in 2017, as the team’s unquestioned leader in 2016, Chris Okey, has moved on to the professional ranks. But the Tigers do return a plethora of standouts who contributed to the 2016 ACC title, including Dick Howser Trophy winner Seth Beer and fellow first-team All-American Pat Krall.

Similar to the program’s TIGERS (Toughness, Integrity, Gratitude, Excellence, Relentless, Selfless) mentality from last season, Lee expressed the idea of being an ACE when handling pressure, mandating that his team will Apply pressure, Compete in pressure situations and Embrace pressure in 2017. He wants his team to serve as a model baseball program, competing aggressively and offensively in all aspects of the game and practice.

“This is Clemson baseball. We’re trying to win championships. I came here to win. That’s the bottom line. And that’s why you’re here. That’s the standard of excellence that we’re going to shoot for every single year.