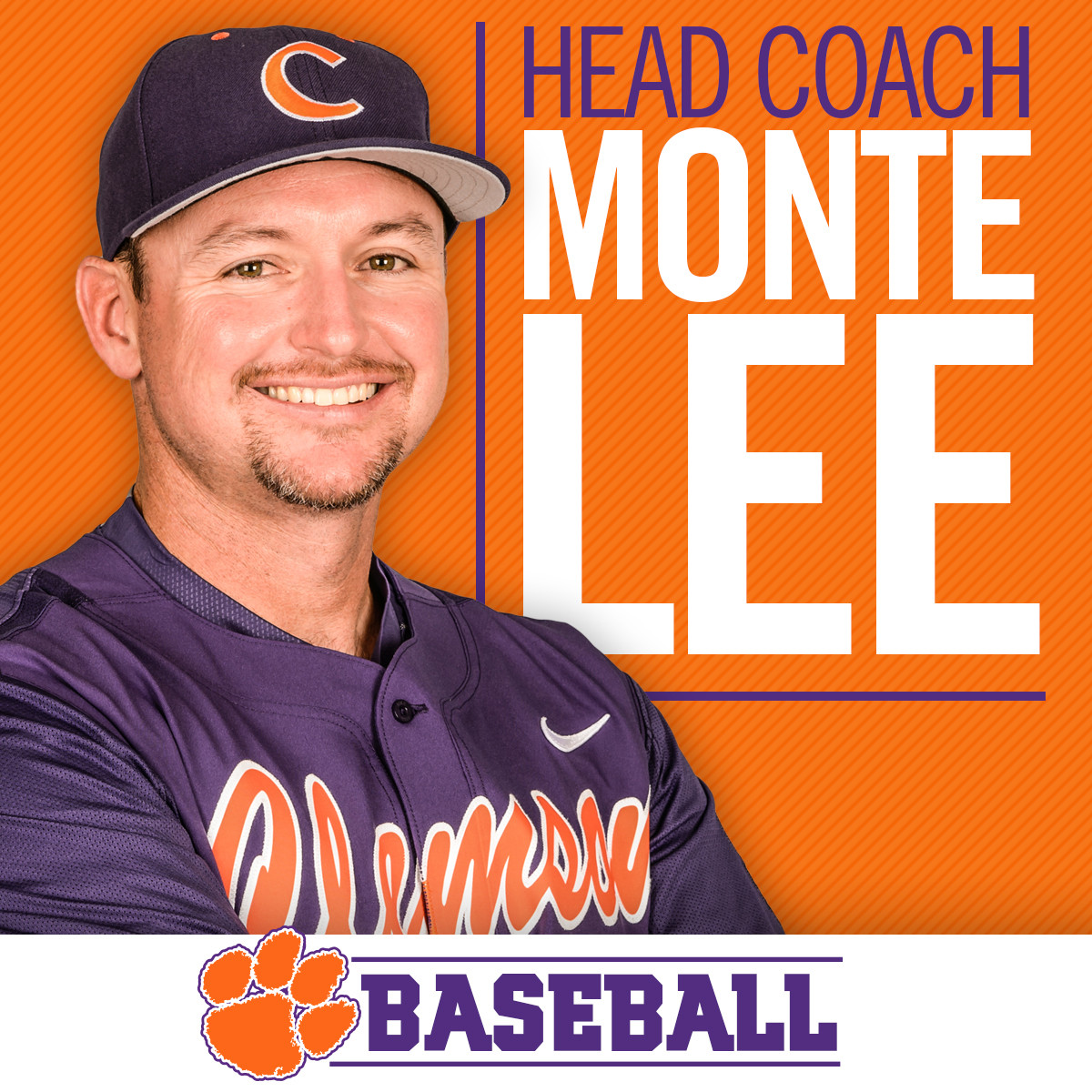 CLEMSON, S.C. – Director of Athletics Dan Radakovich has named Monte Lee as Clemson’s 27th head baseball coach. Lee has served as head coach at College of Charleston for seven seasons, leading the program to a 276-145 (.656) record and four berths in the NCAA Tournament, including each of the past two seasons.

“Monte is a gifted coach whose track record of success is a testament to his energy, coaching acumen and commitment to student-athletes,” Radakovich said. “I am confident that his leadership will create renewed momentum and optimism for Clemson baseball. The relationships he’s created through a lifetime of baseball in our state, along with his proven successes make him the right fit for our program, and we’re excited to welcome him to the Clemson Family.”

Lee, 38, received national acclaim in 2012 when he was named one of Baseball America’s Top 10 head coaches in college baseball under the age of 40. He led the Cougars to four NCAA Tournament appearances, winning the Gainesville (Fla.) Regional in 2014 and advancing to the Lubbock (Texas) Super Regional after capturing the Colonial Athletic Association tournament championship.

“My family and I couldn’t be more excited to join the Clemson Family,” Lee said. “I’m ready to get to work and begin our journey towards bringing a national championship to Clemson. We’re building on a strong foundation and our goals are attainable. We will work together, alongside our student-athletes, fans and alumni to reach our new heights.”

Lee’s 2015 College of Charleston team had a 45-15 record and ranked in the Top 25 for much of the season. Lee earned Colonial Athletic Association Coach-of-the-Year honors, while Taylor Clarke (pitcher) and Blake Butler (player, defensive player) received top conference honors. The Cougars narrowly missed hosting an NCAA Regional, but advanced to the Tallahassee (Fla.) Regional title game.

In 2012, the Cougars won a share of the Southern Conference regular-season title and earned an at-large bid to the NCAA Tournament. They were fifth in the nation in home runs, the fourth year in a row they finished in the top five in that category. On May 7, 2012, College of Charleston defeated Clemson 4-2 at Doug Kingsmore Stadium, the program’s first-ever win over the Tigers.

In his second season in Charleston in 2010, he directed the Cougars to a 44-19 record and an appearance in the NCAA’s Myrtle Beach (S.C.) Regional final.

Prior to his time at College of Charleston, Lee was an assistant at South Carolina for six seasons (2003-08), serving as the volunteer assistant coach for five years before becoming the recruiting coordinator in 2008. During his time in Columbia, the Gamecocks had a 266-130 record, made six NCAA Tournament appearances, earned four super regional berths and two trips to the College World Series.

He began his coaching career as an assistant (2001,02) at Spartanburg Methodist College. The 2002 squad totaled a school-record 51 wins, while the 2001 team played in the NJCAA College World Series. Lee also was the head coach of the South Carolina Diamond Devils AAU team in 2002 after serving as an assistant coach in 2001.

He became the first position player drafted in Cougar history when the St. Louis Cardinals selected him in the 39th round of the 1999 draft. He played 82 games over two years (1999,00) in the minors.

Lee, who received academic all-district honors as a senior, earned his bachelor of science degree in elementary eduation from College of Charleston in 2000 after playing four seasons of baseball and two years of football at Lugoff-Elgin High School in Lugoff, S.C.

He was born Monte Wesley Lee II on Feb. 9, 1977 in Spartanburg, S.C. Lee is married to Eryn Garn Lee and the family has four daughters: Madie, Shelby, Blaire and Alexa.