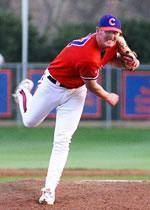 Two Tiger errors led to two unearned runs in Old Dominion’s 3-2 victory over Clemson Wednesday night in front of 337 fans at Bud Metheny Complex. Old Dominion improved to 15-13. It was the Tigers’ fifth one-run loss of the season, as the team fell to 9-9. Clemson allowed just one earned run and eight hits in the two-game series.

Hunter Hall (3-1) earned the win in relief, as he pitched 3.2 scoreless innings of two-hit ball. Kyle Dubois earned his first save of the year, as he pitched the final 2.1 innings without allowing a baserunner. He struck out five Tigers as well. Clemson starter Jeff Hahn (0-1), a native of Winchester, VA, suffered the loss despite striking out a career-high 10 batters in 5.2 innings pitched. He also allowed six hits and three runs, two of which were unearned. Reliever Stephen Clyne pitched 2.1 perfect innings with two strikeouts as well.

Both teams left runners stranded in good scoring opportunities, as the Monarchs left 10 and the Tigers left nine. Tyler Colvin accounted for both Clemson runs on a two-run homer. He drove in all three runs in the two-game set as well. Chris Keenan and Tyler Belcher each had two hits apiece to lead the Monarchs.

After not advancing a runner past second base in Tuesday’s game, Old Dominion’s first batter did just that in the first inning of Wednesday’s game. Keenan led off with a double to the gap in right-center and advanced to third on a throwing error by shortstop Stan Widmann after fielding a ground ball off the bat of Evan Chipman. Bryan Cipolla then walked to load the bases with no outs. Belcher followed with a two-run single just over the glove of second-baseman Taylor Harbin. Hahn avoided further damage by striking out the next three Monarchs.

Tyler Colvin tied the score in the third inning when he lined a two-out, two-run homer down the right-field line, his first of the year. Herman Demmink also scored on the play after he blooped a double to shallow left field.

A moment in the game that turned out to be critical came in the fifth inning. With two outs, Harbin laced a ball that hit just a few inches below the top of the fence in right field. He was stranded when Colvin grounded out to end the frame.

The Monarchs regained the lead in the bottom of the fifth inning thanks to another costly Tiger error. Cipolla reached when first-baseman John Ingram booted a slow grounder and went to third on Belcher’s single to right field. Cipolla then scored on a wild pitch by Hahn.

Clemson stranded two runners on base in both the sixth and seventh innings, as it could not come up with a game-tying hit.

Clemson will travel directly to College Park, MD to play a three-game series at Maryland starting Friday at 7:00 PM.