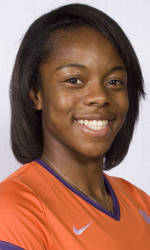 GREENSBORO, NC – Clemson volleyball freshman right side Mo Simmons has been named the ACC Freshman of the Week for the week of Sept. 13-19 for her play in the Clemson Classic. The Tigers claimed the tournament title with a 3-0 weekend, including a five-set match in the conference opener with Georgia Tech.

It is the first career honor for Simmons, and is Clemson’s first Freshman of the Week since the league reinstituted the honor in 2010 after a 10-season hiatus.

Simmons led all players in the Clemson Classic with a .442 hitting percentage, as she accounted for 2.00 kills per set in the tournament. Additionally, she had a key kill in the fifth set against Georgia Tech to pull Clemson to within one in the Tigers’ victory. She has also played solid defense, averaging two digs per set. She led all players in the tournament with four aces, and had a career-best 10 kills against Georgia State.

The Tigers return to action this week in Clemson when they take on Wake Forest on Friday at 7:00 pm and Duke at 6:00 pm on Saturday in a Solid Orange event.