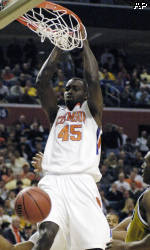 BUFFALO, NY – Clemson point guards Demontez Stitt and Andre Young combined for 40 points Friday, but it was not enough as Missouri took advantage of 20 turnovers by the Tigers in an 86-78 loss in the first round of the NCAA Tournament. The Tigers out of the Big 12 had a 20-5 advantage in points off turnovers, leading to Clemson’s defeat.

The Tigers got a sizzling outside shooting performance, as Clemson went 12-for-24 from three-point range for a 50 percent clip. It marked the third time in the last six games of the season that Clemson made a double-digit amount from beyond the three-point line. Stitt and Young combined to go 9-for-13 from long range, but the Tigers struggled shooting the ball in the second half (38.9 percent).

It matched a career-high for both players. Stitt went over the 20-point plateau for the third time this season, and fourth time in his career. The junior out of Matthews, NC hit 4-of-5 from three-point range, giving him a total of eight long-range shots in his three career NCAA Tournament games. He is Clemson’s all-time leader with eight long-range makes in NCAA Tournament play, and is an astounding 8-of-10 (80 percent) in his career in the national tournament.

Young scored 13 of his 19 points in the opening half, when the Tigers hit 62 percent from long range. It matched his career-high, first achieved in Clemson’s win over Florida State on Feb. 10. Young finished the season with a team-high 60 three-point goals and a solid 38 percent accuracy from behind the arc.

The first half featured a frenetic pace, as expected, considering the style of play imposed by both programs. The Tigers took a nine-point lead at 28-19 after Noel Johnson made his first three-point goal of the game, capping three straight makes from the outside by the Tigers in a span of two and a half minutes. However, Missouri answered with a 9-0 run to tie the game after Miguel Paul scored his only basket of the contest. Young scored Clemson’s final three points of the opening half to knot the game at 39 heading into the break.

In the second half, the action was much like the opening period. Clemson actually led by three at 50-47 following a Jerai Grant dunk and free throw for a three-point play with 14:39 left in the game. Grant finished with 12 points and six rebounds. But once again, Missouri answered with a run.

The Big 12 Tigers outscored Clemson 14-5 over a stretch of four and a half minutes that turned the momentum in Missouri’s favor. Clemson scored 20 points over the final seven minutes of the game, but Missouri shot nearly 60 percent in the final half to put the game away.

The loss put a close to the brilliant career of Clemson senior Trevor Booker, who collected his 32nd career double-double with 11 points and 11 rebounds. Booker, who was often double- and triple-teamed throughout the game, led the Tigers with five assists. He concluded his career by starting all 134 games, a school record. He finished his Tiger career with 1,725 points, fifth-best in Clemson history, and 1,060 rebounds, third in school history.