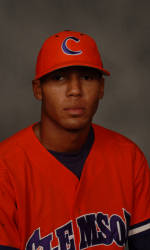 Junior righthander D.J. Mitchell pitched 7.1 solid innings to lead Clemson to a 10-2 victory over Virginia Tech in front of 3,641 fans at Doug Kingsmore Stadium on Sunday afternoon. Clemson, who swept the weekend series, improved to 24-20-1 overall and 10-13-1 in ACC play. The Hokies dropped to 18-26 overall, 4-20 in the ACC.

Mitchell (5-3) fanned a career-high 10 batters to earn the win. He allowed one unearned run on three hits with four walks in 7.1 innings pitched.

The Tigers got on the scoreboard first with four runs in the third inning. Doug Hogan got things started with a double down the left-field line and Stan Widmann was hit by a pitch. Mike Freeman plated both runners with a single to right before moving to second on the throw. Freeman then moved to third on a groundout before Wilson Boyd crushed a two-out, two-run homer to right. It was his seventh long ball of the season.

With two outs in the fifth inning, Kyle Parker hit a two-run double to right that put the Tigers ahead 6-0.

Clemson tacked on three more runs in the seventh. Sanders and Freeman led off with back-to-back singles and Jeff Schaus walked to load the bases. Boyd then plated Sanders with a fielder’s choice. With one out, Parker scored Freeman on another fielder’s choice. Ben Paulsen hit a two-out single to right to put runners on the corners. John Hinson then drove in Parker with a pinch-hit single up the middle.

The Hokies scratched their first run in the eighth, as Sean Ryan hit an RBI single through the left side to score Matt Blow.

The Tigers scored a run in the bottom of the eighth inning. Sanders hit a one-out single through the right side, moved to second on a passed ball, went to third on a groundout, and scored on Schaus’ two-out single to right.

Virginia Tech scored the final run in the ninth inning, as Austin Wates led off with a double down the left-field line, moved to third on a groundout, and scored on a double to left by Jose Cueto.

The Tigers, who tallied 13 hits, were led offensively by Boyd, who went 2-for-4 with a two-run homer and three RBIs. Freeman went 3-for-4 with two RBIs and Parker added three RBIs. Cueto had two hits and one RBI to pace the Hokies, who had six hits in the game.

Clemson will take the next five days off for final exams before playing host to Florida State in a three-game series beginning Saturday at 7:00 PM.