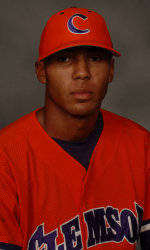 CLEMSON, SC – Former Clemson pitcher D.J. Mitchell made his Major League debut with the New York Yankees on Tuesday night in a game at Yankee Stadium against the Baltimore Orioles. The Orioles were victorious 7-1, but Mitchell did not allow a run in his one inning of work.

Mitchell pitched one inning and gave up two hits, but no runs. He struck out the first player he faced, J.J. Hardy. Mitchell, a 10th round selection of the Yankees in 2008, was the Yankees Minor League Pitcher of the Year last year. For his minor league career, Mitchell had a 40-21 career record.

Mitchell, who will turn 25 on May 13, was called up by the Yankees this past Sunday, April 28 from the club’s AAA affiliate in Scranton. Two days later he was pitching in Yankee Stadium.