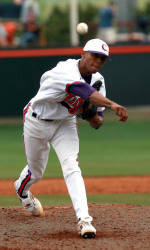 D.J. Mitchell struck out nine batters, while Ben Paulsen and Stan Widmann each drove in three runs to lead Clemson to a 9-1 win against Central Florida in front of 1,017 fans at Jay Bergman Field on Thursday night. The Tigers, who took a 1-0 series lead, improved to 28-25-1, while the Knights dropped to 31-23. It was Clemson’s first-ever game at Central Florida, as the Tigers evened the all-time series 3-3.

Two days after Widmann hit two homers with five RBIs, he went 3-for-4 with a triple, two runs scored, three RBIs, and a stolen base against the Knights. Paulsen added two hits, including a triple, and three RBIs. Florida natives Mike Freeman (Orlando) and Kyle Parker (Jacksonville) also tallied two hits apiece for the Tigers, who totaled 13 hits in the game.

The Tigers jumped out to a 2-0 lead in the first inning. Jeff Schaus was hit-by-pitch and went to second on Parker’s single to center. Paulsen then lined his first career triple down the right-field line on an 0-2 pitch to score Schaus and Parker.

In the top of the fourth inning, Doug Hogan led off with an infield single, stole second, and went to third on an error. Three batters later, Widmann lined out to left field, but Hogan scored on the sacrifice fly to give Clemson a 3-0 lead.

With one out in the top of the fifth inning, Parker blasted a solo homer to left-center, his 12th long ball of the season.

Clemson doubled its lead with four more runs in the sixth inning. Pinch-hitter John Nester hit a one-out, infield single to get things started. After Matt Sanders walked, Widmann laced a triple to right-center to score Nester and Sanders. Freeman followed with a single to left-center to plate Widmann. Schaus followed with a grounder that shortstop Eric Kallstrom booted, allowing Freeman to move all the way to third base. After Parker was hit-by-pitch to load the bases, Paulsen hit a sacrifice fly to shallow center to score Freeman.

The Knights dented the scoreboard in the seventh inning. Ryan Richardson led off with a single up the middle. Two batters later, Kallstrom belted a double down the right-field line to score Richardson.

Clemson responded with a run in the top of the eighth inning. Widmann led off with a single through the left side and stole second base. After moving to third on Freeman’s infield single, Widmann scored on Schaus’ sacrifice fly to left.

Richardson and Kallstrom had two hits apiece for the Knights, who totaled six hits in the contest.

Clemson and Central Florida will play game-two of the three-game series on Friday at 6:30 PM.