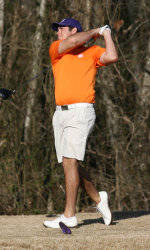 Mills Makes Hole in One at US Collegiate

Clemson, SC – Sophomore Corbin Mills made the first hole-in-one in five years by a Clemson golfer on Tuesday, but the Tigers finished 12th in the field of 15 teams at the United States Collegiate at the Golf Club of Georgia in Alpharetta. The competition concluded the fall season for the Tigers, who were ranked 13th in the nation entering this tournament.

Mills made his ace with an eight-iron on the par three 183-yard 13th hole. It was just the fifth hole-in-one in a tournament in Clemson men’s golf history, the first since Brian Duncan made one on the 17th hole at Bulls Bay in Mount Pleasant, SC on March 29, 2005.

Mills hole-in-one came just two days after former Clemson All-American Jonathan Byrd made an ace on the fourth hole of a playoff to win the Justin Timberlake Shriners Hospital for Children Open in Las Vegas, NV. That was a first in PGA Tour history.

McCuen Elmore, who had made a hole-in-one on a par four at Cross Creek Plantation in Seneca, SC during qualifying for the US Collegiate last week, was Clemson’s best golfer for the tournament with a score of five over par 221. He had rounds of 75-70-76 and finished in a tie for 27th place.

Sophomore Crawford Reeves shot a 225 to rank second among Clemson golfers. He had three consecutive rounds of 75. Mills was third best among the Tigers with a 226 score after rounds of 75-76-75.

David Dannelly finished with a 233 score after rounds of 78-79-76 and Brewer Bradshaw was fifth among Tiger golfers with a 249 score for the three rounds.

Tuesday’s action was the final tournament of the fall of the Tigers. Larry Penley’s team will next hit the course Feb. 7-8 at the Jacksonville Invitational at the TPC Sawgrass in Jacksonville, FL.