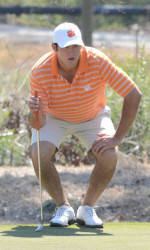 Mills Advances to Final Four of US Public Links

CLEMSON, SC – Clemson junior Corbin Mills won his fourth straight match at the US Public Links Championship with a 4 & 3 victory over Andrew Vijarro of Bend, OR on Friday. Mills now advances to the Final Four of the event against Harris English of the University of Georgia. That match will start at 4:30 PM Eastern time today. The winner will play a 36-hole championship on Saturday. The winner of the US Public Links typically receives an invitation to the Masters.

This year’s match play of the US Public Links is being played at the Old Macdonald course at Bandon Dunes, OR.

Friday morning, Mills dominated the match with Vijarro, a member of the University of Oregon golf team who was playing in his home state. Mills never lost a hole and had four wins, including three on the front nine.

He won the par four third hole with a birdie, then won the seventh with a birdie and the eighth with a par. The two players then halved the next five holes before Mills won with a par on the 14th hole. He then closed out the match with a halve on the 15th hole. Three of Mills’ four wins came on par four holes. He has now won the 14th hole in three consecutive matches. He has won eight holes and lost only two on holes ninth through 14 in his four matches so far.

Mills is trying to become the first Clemson golfer to win the US Public Links since D,.J. Trahan in 2000.