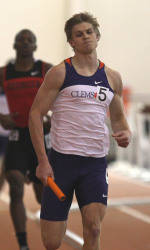 Moss had a banner indoor season for the Tiger track & field team. He won the NCAA championship in the heptathlon by scoring a personal best 5,986 points at the national meet in March. Moss also won the conference title in the heptathlon and was honored as its 2011 ACC Indoor Field Performer of the Year. He was also the USTFCCCA Southeast Region Men’s Indoor Field Athlete of the Year. A versatile athlete, he was also a member of Clemson’s ACC indoor champion 4×400 meter relay. He earned his undergraduate degree in parks, recreation and tourism management in December of 2010.

Clemson had six representatives on the women’s All-ACC Academic Indoor Team, led by two-time honorees Karine Farias and Kim Ruck. Farias was a scorer at the ACC Indoor Championships in the pentathlon, while Ruck was all-conference in both the 3000 and 5000 meters.

Clemson’s four other selections to the women’s team were all first-time honorees: senior Danielle Curry, junior Misha Morris, freshman Lauren Terstappen and sophomore Marlena Wesh. A transfer from the University of Oklahoma, Wesh was the ACC’s indoor champion in the 400 meter dash.